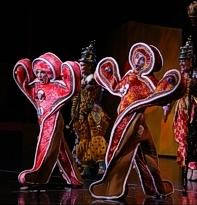 Ed Sullivan would be so pleased with 'Cirque Dreams Holidaze,' the current offering of the California Musical Theatre.

The spectacle - created and directed by Neil Goldberg - has twirling plates, people tossing other people up in the air (and catching them), balancing acts, unicycles and, my personal favorite, quick-change artists. And more glitter than you'll find on a Las Vegas stage.

It was The Ed Sullivan Show on steroids ... and continues through Sunday.

It's a self-described 'wonderland of fantasy and disbelief,' a rock opera, circus, musical, and holiday show all rolled into one, which scores with almost every act and then spoils it by ending with an amazingly offensive finale.

The stage opens on a Christmas set with gigantic, oversized tree, nutcracker and candy canes. The idea is that we are looking at the toys' view of the Christmas room, and we are to be given a behind-the-scenes look at what goes on when all the humans go to bed.

Some of the more memorable bits include 'Twirling Around,' a group of girls who twirl 'baubles' on ropes, tossing them high into the air and back and forth to each other. A bit which started out calmly, that turned out to be extraordinary.

A man balances a series of plates, crystal glasses and lighted candles on his chin as he walks up and down a ladder, ending with dismantling the stack piece by piece.

An adorable little girl has an interaction with Santa Claus that includes balance and rigidity and amazing control by the little girl.

A gingerbread house is constructed while gingerbread men dance around and a child is tossed up and in circles over and over by (his father's?) feet.

The Bell Conductor (Peterson Jardim from Brazil) has a long audience participation segment that ends the first half of the show.

It is very funny and involves five randomly selected audience members scattered throughout the theater. The husband of radio host Mary Jane Popp was one of those chosen to play the bells and gave it his all, to much applause.

The second half of the show brings bicyclists, more gymnasts and a flock of people in penguin suits who tumble, skate and march around the stage while the principal penguin (who might have been the balancing guy from Act 1 ... most performers are not named in the program) balanced on an assortment of tiny, movable objects.

A controversial piece, 'Angels in Flight,' is actually quite beautiful, if you don't think about what is going on. Two long silk pieces float down from the skies while cut out angels with more chiffon are lowered and the cloth spread out. Flying angels Dmytro Deyneko and Svitlana Guranchyk begin a very sensuous, very physically demanding aerial dance, where their bodies intertwine with one another and with the material.

The only problem with this otherwise beautiful number is that the theater is filled with the glorious voices singing 'O Holy Night.' As the choir sings 'this is the night of the dear Savior's birth' it was looking more like it was the night of our dear Savior's conception. After the show ended, a woman walking next to me was saying that she is not a religious person, but even she found the number offensive.

'Cirque Dreams Holidaze' is well worth seeing, especially if you miss acrobats on television!
Posted by Bev Sykes at 9:35 AM