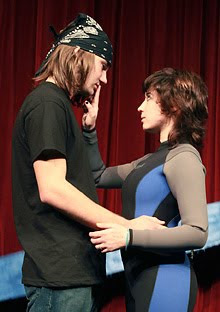 The rudeness of the Veterans' Memorial Theater audience at opening night's performance of Acme Theatre Company's 'Anon(ymous)' distracted from the quality of the production.

Many in the audience had obviously come to see their friends and laughed loudly in many parts of the drama. The students sitting in the row in front of me used their electronic gadgets to check e-mail, check Facebook statuses and write messages throughout the entire one-act performance. Shame on them.

But other than that, the performances of this rather odd play, directed by Emily Henderson and Maddy Ryen, were quite good. I was especially pleased to note that for the first time in a long time, I had no complaints about projection in any of the actors. Even from the back row, I could clearly hear every single word.

This contemporary production by award-winning California playwright Naomi Iizuka was inspired by Homer's 'Odyssey' and tells the story of Anon, separated from his mother while fleeing his war-torn homeland.

After a boat wreck, he is swept ashore on the margins of America and embarks on an epic journey to find a place he can call home.

It is a gritty, off-the-wall adaptation of 'The Odyssey,' which reframes 'the journey home' within the refugee experience and present-day immigration in the United States. This becomes quite clear in the striking opening scene where Anon, who calls himself 'Nobody' (Nick Mead) stands in a pool of light and begins to tell his story ('Where I come from there was a war that lasted so long people forgot what they were fighting for...')

Behind him, behind sheer curtains, we see silhouettes of other people telling their own stories.

'Where I come from is high up in the mountains and the sound of thunder is so loud it sounds like the end of the world.'

'Where I come from is the edge of an ocean so blue you can see straight to the bottom...'

'Where I come from giant birds circle overhead, so many you can't count them...'

From Dumpster diving, to talking with ghosts, to fighting a one-eyed butcher (reminiscent of the man-eating Cyclops in 'The Odyssey'), Anon ricochets from one chaotic adventure to the next. At the heart of his quest is his mother Nemasani (Gigi Gilbert-Iglesrud), the one person whom he loves. The two became separated attempting to escape the war in their country by leaving on a ship, which ultimately sank. Unbeknownst to each, both survived and Anon's search for 'home' has lasted for more than 20 years.

In the meantime, his mother has been working in the sweat shop of Mr. Mackus (Antonio deLoera-Brust) who is determined to marry her, against her wishes.

In his travels, Anon meets a variety of people like Calista (Sam Ramos), a rather empty-headed spoiled girl whose father owns the island on which Anon is washed up, so she feels she owns him and needs him to stay and be her personal plaything.

There is the lovely Pascal (Alix Miller), who disappears in a most distressful manner.

Jon Dycaico and Amber Bianchi are Senator Laius and his wife, who visit the sweat shop and have a rather condescending chat with Nemasani (with whom they have a surprising secret in common).

Dycaico also appears as the evil Mr. Zyclo while Roxanne McNally does a fine job of strutting about as Zyclo's pet bird.

Tomas Eredi is memorable for his short performance as Strygal, the truck driver.

Dashiell Menard is quite convincing as the blind man, Ali, while Margaret Starbuck and Kashmir Kravitz play his wife and daughter, respectively.

Others in the cast include Holly Buhlman as the goddess Naja, Katy Zaragoza-Smith, Emma Kurtz, Casey Marr and Neal Rock. Everyone gives a solid performance.

Although the story of Odysseus is the epic journey of a single hero, 'Anon(ymous)' incorporates stories of anonymous, marginalized people - the individuals Anon meets along the way who are unable tell their own stories.

Despite their voicelessness, the aptly named Anon becomes a mouthpiece for their anonymity through his remembrance of their experiences.
Posted by Bev Sykes at 4:06 PM