Musical of Musicals, the Musical 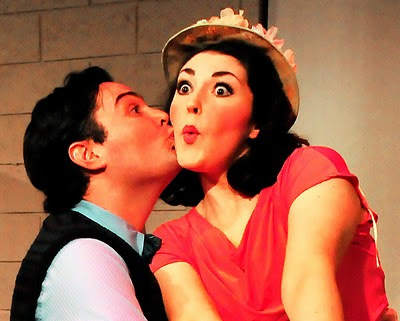 Any fan of Broadway musicals is going to love Sacramento Theater company’s new show, “The Musical of Musicals: the Musical!” by Eric Rockwell and Joanne Bogart, directed by Michael Luan.

In just a little more than an hour and a half, five musicals are presented. Each show follows the old melodrama plot, “I can’t play the rent” and shows how the problem would be solved following five very different styles – Rodgers and Hammerstein, Stephen Sondheim, Jerry Herman, Andrew Lloyd Webber and Kander and Ebb. The focus is on these men's best known shows, with others thrown into the mix.

There is the fun of the scripts themselves, somewhat recognizable as a well-known show, the songs that sound familiar, but not quite, and then suddenly a familiar character, situation, or line from another show appears, like when in the opening send-up of “Oklahoma” (named “Corn”) the setting is described as “Kansas in August” (a line from “South Pacific”), and a character describing his physique refers to “belly high.”

There are countless delicious throw away lines like “don’t throw OKs at me” and “Specific Overtures,” and even musical interludes that pop up unexpectedly. Music director and accompanist Eric Daniels told me after the show that even after the weeks of rehearsal, he is still discovering little bits of musical humor in the score of the show.

The cast for this show could not be more perfect representations of the ubiquitous characters in most musicals.

There’s the ingenue, who can’t pay the rent and needs a hero to save her (Jessica Goldman). She becomes either June or Junie Faye, or Junita, or Juny, depending on the “show.”

The hero (Jerry Lee) is either Big Willy, Billy, William, or Bill.

What makes it all work is that the writers of this show not only understand each of the genres they are parodying, but they obviously both respect them and love poking fun at them.

In addition to “Corn,” the cast takes us through the music of Sondheim in “A Little Complex,” in which the dark forest of “Into the Woods” becomes an apartment complex called “The Woods” and the vicious landlord bears a striking resemblance to Sweeny Todd.

Jerry Herman’s “Mame” gives the basic structure of “Dear Abby,” which includes all of the grand entrances and show-stopping numbers which are so much a part of Herman’s shows, including a wonderful “Sunset Boulevard”-ish number which gives Kight a chance to chew the scenery with great relish.

“Aspects of Junita” marries “Evita” with “Phantom of the Opera” and many other Lloyd Webber shows, hung together with “I’ve heard that song before.”

The show ends with a salute to Kander and Ebb by combining shows like “Cabaret” with “Chicago,” among others. Michael RJ Campbell does a wonderful send-up of Joel Grey’s MC and the song “Round and Round” has brilliant lyrics that give the whole story of Cabaret in less than 3 minutes.

Devotees of musicals will get the most enjoyment from this show, but even if you don’t get all the “in jokes” the show itself is very funny on its own and well worth checking out.
Posted by Bev Sykes at 3:42 PM