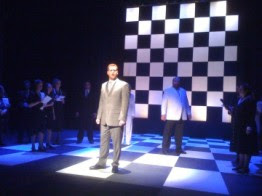 The Davis Musical Theatre Company has hit one out of the ballpark with its wonderful new production of 'Chess,' directed by Steve Isaacson, with musical direction by Isaacson and Jonathan Rothman, and choreography by Pamela Lourentzos.

The cast is outstanding, the set, in places, breathtaking .. .and where in the world do they fit a 19-piece orchestra in that little understage pit?

The story may be a little confusing to follow, as much of the plot seems to take place between scenes and you gradually come to realize what is going on. Fortunately, unlike the last production of this show that I saw, the actors' diction was quite good, which made it easier to catch up.

But if the music occasionally sounds vaguely familiar, and you can't quite place it, it may be because it was written by ABBA musicians Bjorn Ulvaeus and Benny Anderson (lyrics by Tim Rice and book by Richard Nelson).

The action begins in 1956 Budapest, where Gregor Vassy (Jason Markel), is hiding with other refugees, and teaching his young daughter Florence (the adorable Naomi Debello) to play chess. During the course of the lessons he tells 'The Story of Chess.'

Her father arranges for Florence to be sent to safety in America, but before they part, he breaks a chess piece in two, giving her half and keeping half for himself, as his promise that they will one day be reunited. His 'Father's Lullaby' was very touching.

Holmes is marvelous as the boorish Trumper while Ditter, in addition to bringing a wonderful voice to the role, also adds a quiet dignity to the proceedings.

Repeating the role she played in 2000, Andrea Eve Thorpe is wonderful as the adult Florence Vassy. Her voice has the proper brassy tone to bring the right sound to the Ulvaeus/Anderson music. Her duet with Anatoly's wife Svetlana (Eimi Taormina), 'I Know Him So Well,' is a show-stopper. It's a painful acknowledgment by a wife and a lover that neither of them can give their man all he needs.

(It was nice to see the talented Taormina in such a meaty role.)

Other excellent performances are given by Roger Clark, as the perfect KGB agent, Ivan Molokov. Jeffrey Lloyd Heatherly is Walter Anderson, the American opportunist who finds a way to manipulate both sides to his own advantage. Elio Gutierrez is memorable in the short role of the arbiter.

The story concerns Freddie's tantrum when he feels that somehow Anatoly is cheating at their chess game because he eats yogurt during the game, and Anatoly's ultimate decision to defect to the West, singing the beautiful and emotional 'Anthem.'

In Act 2 there is a rematch set in Budapest and we learn the repercussions for Anatoly's family following his decision to defect, and the painful decisions everyone will have to make.

John Ewing's scenic design was simple, but beautiful. The floor is painted a black-and-white checkerboard and the pattern is repeated on the back wall. The wall is occasionally lit in various shades of red (lighting design by Steve Isaacson), providing an effective mood change.

However, the most impressive effect was at the start of the scene in a Bangkok nightclub, which begins with a breathtaking figure standing tall with draped gold fabric. Definitely one of the most memorable moments of the evening.

This production of 'Chess' is a winner.