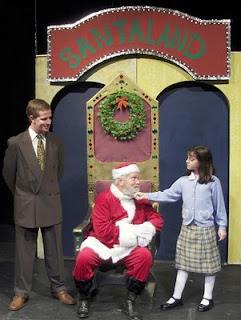 My very favorite Christmas movie ever is “Miracle on 34th Street,” written for the movies in 1947 by Valentine Davis. It starred Maureen O'Hara, John Payne, a very young Natalie Wood and Edmund Gwenn as Kris Kringle (Gwenn won the Oscar that year for best actor in a supporting role).
There have been three remakes for television, a movie remake for the big screen and a Broadway musical version in 1963.
In or around 2006, Will Severin, Patricia DiBenedetto Snyder and John Vreeke adapted the story for the stage and that stage adaptation is this year's holiday offering by the Woodland Opera House, under the direction of Jeff Kean.
There is a danger in adapting a familiar film to the stage, that being that while you can do short scenes that dissolve into other short scenes rather seamlessly in a movie, on a stage, brief scenes in one setting followed by a brief scene in another involve complicated set changes.
Even though director Kean has costumed his set crew with colorful Santa hats and uses sets on wheels that move in and out quickly, it still sometimes has the feel of “say a couple of lines, wait, say another couple of lines and wait again” while the sets are being changed.
It's an unavoidable problem that Kean sometimes manages to occasionally solve by having two characters stand on one side of the stage without a set while two other characters stand on the other side. Only a pool of light indicates there is a change of scene.
Setting aside the choppiness of the action in a show that has more than 30 scenes, the overall production is certain to delight audiences.
Jeff Nauer is a wonderful Kris Kringle, hired by Macy's when its parade Santa Claus (Matthew Taul) shows up drunk to work. Kris is later hired to be the in-store Santa and causes an uproar when, in the spirit of Christmas, he sends the parents of children to different stores when they are unable to find their child's desired toy at Macy's.
Kris' immediate boss is Doris Walker (Jen Smuda-Cotter), an embittered woman who is out to teach her daughter Susan (Ani Carrera) the realities of life and refusing to allow her to believe in fantasies such as Santa Claus.
Doris' neighbor Fred Gailey (Matthew Moore) is trying to help the little girl have a more normal childhood, especially when he offers to let the homeless Kringle stay with him.
The adult actors give good performances, and Ani Carrera is perfect in the role of a too-wise-for-her-age child who just really wants to believe in Santa Claus.
There are excellent performances in smaller roles, particularly Charley Cross as Mr. Macy, and Steve Cairns, who plays the multiple roles of Mr. Gimble, Charlie Halloran and prosecutor Mara, determined to have Kris committed to a psychiatric hospital.
Spencer Alexander is the perpetually blustery Mr. Shellhammer (the real character's name, and presumably no relation to Woodland Opera House education director Angela Shellhammer).
Bruce Lohse is suitably judge-like in his portrayal of Judge Harper, who must decide Kris' fate and who runs the risk of telling all children everywhere that there really is no Santa Claus.
Kean's sets are ingenious, whether they are rolled on or flown in, often one being rolled on while the other is halfway up into the rigging. When finally in place, they work beautifully.
Laurie Everly-Klassen has put together a large collection of costumes very true to the 1940s, giving a completely authentic look to each scene.
“Miracle on 34th Street” drags a bit, but only because of the structure of the script, not because of the contributions of those involved. It is still a delightful couple of hours and should be a lot of fun for everyone who attends.
Bring tissues. After all these years, I still get misty-eyed at the ending!
Posted by Bev Sykes at 6:07 PM