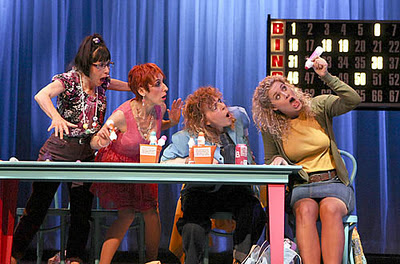 “Bingo, the Winning Musical,” by Michael Heitzman and Ilene Reid, currently running at K Street’s Cosmopolitan Cabaret, fills a niche that nobody realized needed filling. It’s a musical about trailer trash women addicted to bingo, and the traumas and passions of their lives.

It’s also about a long-running feud over who interfered with whom in the purchase of what turned out to be a winning bingo card.

I was not able to see the show at its opening performance, when the audience is usually packed with critics and friends of the theater, so the audience I saw was the real deal, and the theater was nearly filled with enthusiastic people delighted to be playing bingo as part of the show itself.

Apparently bingo does find a niche with a certain segment of the population. One reviewer said this show had the possibility to be for the middle-aged woman what “Wicked” was for their teenage daughters. I wouldn’t go that far.

This is a show where the plot is so predictable that it really is almost irrelevant to the show itself, and though the second act has seven songs, five are reprises of what was already sung in Act 1.

But somehow, despite what are surely obvious shortcomings, the talented cast makes it so fun that it works. And you even get to play three games of bingo and win cash prizes!

Lisa Raggio (playing Vern) will be a familiar face to many. She has a long nightclub, stage and television résumé and is one of those people you know you’ve seen before, but can’t quite place where. Vern is the alpha of the group and it’s because of her that her two cohorts haven’t talked with Bernice (Bonnie Bailey-Reed), with whom Vern had a dust-up many years ago.

Vern had some great interplay with a table of patrons in the audience who had the fortune or misfortune to win one of the bingo games the audience plays.

Eydie Alyson is Patsy, who has been highly superstitious ever since that night the group turned its back on Bernice. She can’t play without her trolls and the other lucky charms she packs with her to all of her bingo games.

She’s a great comedic actress, in the style of Ann Morgan Guilbert, who played Millie Helper in the old Dick Van Dyke series. And while it doesn’t have any impact on her performance, it’s interesting to note that she is married to “the silently hilarious pianist” on “Glee.”

Nikki D’Amico is Honey, the trailer trash version of Blanche Devereaux (“Golden Girls”). She has her sights set on the bingo caller, Sam (Michael Stevenson), and gets in several great double entendres dripping with sexual innuendo. Their duet, “Gentleman Caller,” is one of the songs reprised in Act 2, only from Sam’s side of the story.

The newcomer, Alison (Jessica Crouch), hides (just barely) the secret that she is the shunned Bernice’s daughter. Her mother is dying and she has come to see if she can’t patch things up with her friends because Mom needs a transfusion of a rare blood type.

In addition to playing the spirit of Bernice, Bonnie Bailey Reed also plays Minnie, who runs the bingo parlor and circulates throughout the audience during the actual games to make sure people are playing correctly and to award prizes to the winners.

Stevenson, in addition to being the Sam of today’s bingo game, is also bingo caller Frank of that infamous game so many years ago.

As with most of the Cabaret sets, this one is utilitarian but fun, with the girls sitting at a table facing the audience, Sam at the table where he is choosing the new ball, an electronic board at the back, and lighted signs in the audience, which show the configuration of the next bingo game. (Who knew there were so many?)

This show is dumb on so many levels that I was surprised when I realized I was chortling over several bits and that the song “Girls Night Out” has become an ear worm for the rest of the evening. But at its heart, “Bingo, the Winning Musical” is about the importance of friendship, and that’s a good message for anybody to receive.

The show runs through Jan. 8, so grab your BFF and your bingo card dauber, head on over to the Cosmopolitan Cabaret and just immerse yourself in the inanity. You can even buy popcorn in the lobby
Posted by Bev Sykes at 3:52 PM