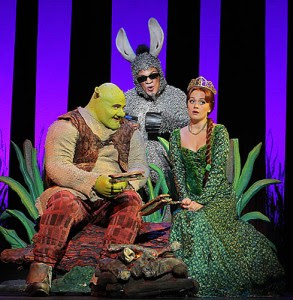 The crowd at Tuesday night’s opening of “Shrek, The Musical” (book and lyrics by David Lindsay-Abaire, music by Jeanine Tesori) may have been one of the biggest I’ve ever seen at the Community Theater.

The line of patrons waiting to spin the wheel to win a prize at the Mix 96 booth stretched almost around the block, little girls came dressed in sparkly princess costumes, adults and children of all ages entered the theater wearing Shrek horns on their heads, and everyone seemed on the edges of their seats, expecting something special.

They were not disappointed. Based on William Steig’s book “Shrek!” and the Dream Works animated film, the story of everybody’s favorite ogre — with the message that everyone is worthy of true love — is filled with fun characters, double entendres, great costumes, fun dance numbers and more belch and fart jokes than I’ve ever seen in one show before.

This is not an instant stage classic that we will be seeing again for decades, nor does it have memorable music (except for the closing number, Neil Diamond’s “I’m a Believer,” first recorded by the Monkees in 1966). But for what it is, it delivers.

Much of the movie’s charm came from in-jokes and visual effects and being able to snicker at the lesser characters who each brought a funny part of a familiar fairy tale to the story.

That is there in the stage show, but somehow it lacks the charm of the movie.

That said, however, the stage show delivers some really spectacular effects, particularly the Tony Award-winning dragon, created by Tim Hatley, as impressive as some of the costumes from “The Lion King.” The dragon swoops and flies and turns in circles on stage and above the stage and is amazingly lifelike — if there had ever been such things as fire-breathing dragons!

Likewise, the characters that Shrek (Lukas Poost) and his sidekick Donkey (Andre Jordan) encounter on their way to free the Princess Fiona (Liz Shivener) from the dragon’s castle are just loads of fun, particularly the tongue-in-cheek nod to “Lion King” designer Julie Taymor.

Fiona also does a wonderful dance number helping the Pied Piper with his rats.

As for the performances, Poost makes a lovable Shrek, an ogre who had been sent out on his own at age 7 and who just wants to live quietly, alone, in his little shack. But he has a sense of duty and when he takes on the task of rescuing Fiona for the scheming Lord Farquaad, he takes the task very seriously. Poost has a strong and resonant voice and despite the padding and face mask, makes a sympathetic character out of Shrek.

Shivener is an enthusiastic Fiona, thrilled to be released from the prison where she has spent her entire childhood, confused about who Shrek really is, but eager to meet her husband to be … and also hoping to keep her own secret hidden.

Merritt David Janes is the diminutive Lord Farquaad. The actor does well playing the role on his knees, with fake legs dangling in front of him. He is even able to dance.

Several of the lesser characters make an impact, primarily the whiney Pinocchio (Luke Yellin), whose nose grows and shrinks on stage without any visible assistance from Yellin himself.

Some of the scenic backdrops by Tim Hatley are simply spectacular.

“Shrek” will enchant most, no matter what age. And don’t forget to take home a pair of Shrek horns!
Posted by Bev Sykes at 7:00 PM