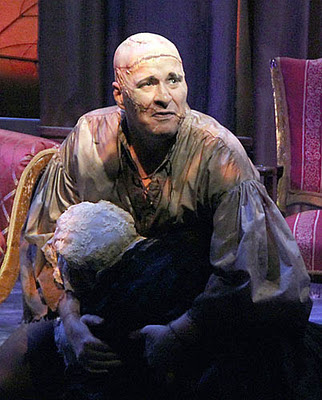 Forget Boris Karloff, Bela Lugosi, Lon Chaney or any of the Hollywood renderings of the Mary Shelley novel, “Frankenstein.” You will see no green tinted skin or neck bolts coming from “the creature” in the production, dramatized by Tim Kelly, now at Sacramento Theatre Company through Oct. 30.

This production, directed by Michael Laun, sticks more closely to the original book. We never see Victor Frankenstein’s laboratory, and the horror comes from dialog that will have you leaving the theater talking about the philosophical implications of the story and asking … who was the real “monster”?

“Frankenstein,” was written in 1818 as the result of a contest among Mary Shelley and other writers — including husband Percy Bysshe Shelley, Lord Byron and John William Polidori — to see who could write the best horror story. (Polidori later would be known as the creator of the vampire genre with his novel “The Vampyre,” in 1819.)

The STC production includes a top-notch cast, almost all at the top of their game.

William Elsman, last seen as Sherlock Holmes and a perennial favorite as Mrs. Baddenrotten in STC’s frequent Christmas show, “Cinderella,” is definitely bad and rotten as the tortured scientist, who confesses to his wife, on their wedding night, of all of his terrible misdeeds as he warns her that he is about to be killed.

The story is a bit vague on how the creature (who is never called by any name, but only “the creature”) was constructed, other than to say that a lot of grave robbing and deals with shady persons in back alleys were involved. We do know that Victor’s life passion had been to discover the cause of life and, by using various human parts, he is able to bring his creation to life.

It is his refusal to take responsibility for his success in doing what he set out to do that forms the basis for the story. It is difficult to understand why, after creating this human-like lifeform, he would then be horrified and run away from it.

But one must suspend disbelief in order to become involved in the rest of the story, which is that the creature (Ed Gyles Jr.), who is remarkably eloquent, has tracked down his maker, demanding that Victor create a mate for him. The creature suffers incredible anguish because he is terribly lonely. He is ugly so people shun him.

”I am an outcast with no hope of redemption and no love,” he wails. All he wants is a companion and promises that if Victor creates a female partner for him, the two of them will go away and nobody will hear from them again.

There are lots and lots of holes in the plot but the real drama comes from the discussions between man and creature and between Victor and his best friend Henry (Jerry Lee), to whom the scientist has confessed his actions and who agrees to help in the creation of a second (female) creature.

Gyles makes the creature almost likable, and we definitely feel the pain of his isolation, but then we remember that for some unexplainable reason, he killed Victor’s young brother and we see that he is capable of flying into rages when frustrated. He is Lennie, in “Of Mice and Men.” but with more stitching.

With Elsman, we see the brilliance of Victor Frankenstein, but also his weakness which results in the destruction of everything he loves in life.

Henry, as played by Lee, is still full of the wonder of Victor’s accomplishments and eagerly agrees to assist in the creation of another life, which ultimately proves to be his undoing.

Others in the cast include Brittni Barger, as Victor’s fiancée Elizabeth. Her role is small, but she ably displays her love for Victor, though surprisingly not much disbelief as he tells her of his creation.

Linda Montalvo gives a solid performance as housekeeper Sophie and Jim Lane can always be relied upon to give a good performance, in this production as Ernst, the inspector-general of police.

Susan Andrews, as Frau Frankenstein, Victor’s mother, may be the weakest in the show as one was always aware of her “acting,” and not really involved with the character.

The set by Jarrod Bodensteiner is sumptuous and the lighting design of Jessica Bertine nicely helped create the “horror” mood, especially during scene changes. Jessica Minnihan’s costumes and makeup were fine, though the creature didn’t look all that scary from the back of the house.

If you’re looking for an old-fashioned, Hollywood-style Halloween horror experience, this may not be your cup of tea. But if you want to find your horror in the things that men can do without thinking their actions through to their ultimate conclusion — which may be even more horrifying, though easier to believe in this day and age — this is a perfect way to spend an evening.

One thing is certain. You will be discussing the various elements of this show as you leave the theater, and perhaps for days to come.