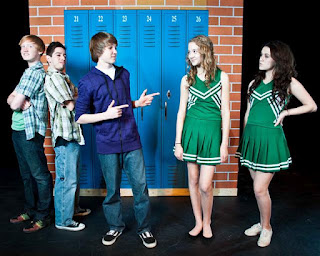 It’s fairly safe to say that the musical “13″ with book and lyrics by Jason Robert Brown is never going to become a beloved classic that is brought back time and time again.

An older couple talked to me before the show about how much they had loved the previous production of “South Pacific” and hoped that this show would be as good. I wondered what they were thinking as the opening number of “13″ began:

Who’d have guessed Dad would meet a stewardess?
Mom’s depressed and her lawyers are mean
Now I’m stressed, life is a disaster
And I’m cracking from the strain, going totally insane

The plot centers on Evan, a 12-year-old New York Jewish kid about to have his bar mitzvah and looking forward to the party. When he learns his parents are divorcing and that he must move with his mother to Appleton, Ind., he feels his life is over. The show centers on Evan trying to make friends so he can have the big party. Themes include modern teen interest (a lot of emphasis on “kissing with tongue”):

Guys, Kendra’s a good girl. I can’t just hit on her like whack-a-mole.
I do that, I will never get the tongue. Incoming! Kendra, 3 o’clock!

You get the idea.

While this may be the thinnest of plots, what makes it work is a strong cast, and Woodland has that. With a cast whose average age is about 14, it’s not surprising that there is a range of quality and that some voices are not quite up to the songs they have to sing, but overall, they handle the material well and director Amy Shuman has done an excellent job with her cast.

Seventeen-year-old Tony Cellucci, as Evan, is in almost every scene and has seven songs, a huge task for even seasoned performers. Happily, Cellucci carries it like a pro. He is likeable, he takes command of the stage, sings well, and he dominates any scene in which he appears. He is particularly wonderful in “Evan’s Haftorah.”

Devin DeGeyter is Archie, Evan’s disabled pal. So convincing is DeGeyter dragging himself around the stage on his crutches that it was almost a surprise to see him walk on stage for the final bows. He has more of a New York attitude than a mid-west attitude but he is a great, memorable character.

Abby Miles is Patrice, Evan’s new next-door neighbor. We never find out why exactly she is disliked by everyone else in the high school but she is a wonderful best friend, and very poignant in songs like “Good Enough.”

Not surprisingly, the most popular guy in school is Brett, the football star (Peter DeBello), who is the guy who is determined to kiss Kendra with tongue. He is obsessed with tongue. DeBello gives a solid performance

McKinley Carlisle is Lucy, Patrice’s best friend. Carlisle, making her opera house debut, has 13 years of theater under her belt and it shows in her comfort on stage. At 18, she is one of the oldest in the cast.
Emma Black plays Kendra and is the perfect high-pitched teenage girl, whose innocence is a great part of her character.

Some of the smaller roles, Emily Miller as Cassie and Devon Hayakawa as Charlotte give outstanding performances in some of the ensemble numbers.

Sets moved on and off stage are almost nonexistent, but set designer John Bowles makes use of projections on the back wall, which is very effective.

Rodgers and Hammerstein this ain’t, but for the right audience, “13″ is an enjoyable show. When the show opened in Jerusalem, it became an overnight sensation. There were certainly a lot of very excited young people whooping and hollering on opening night.
Posted by Bev Sykes at 10:55 PM