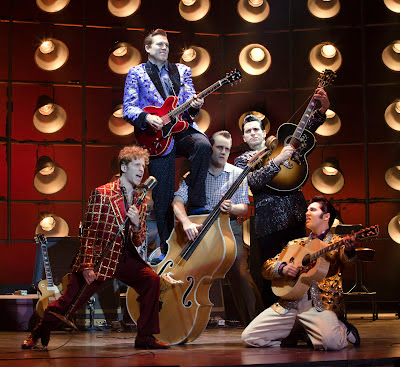 There’s a whole lotta shakin’ goin’ on over at the Sacramento Community Center. A lot of grey haired people are dancin’ and clappin, whoopin’ and hollerin’ like it’s 1956.

“Million Dollar Quartet” recreates a famous night shortly before Christmas in 1956 when Johnny Cash, Jerry Lee Lewis, Carl Perkins and Elvis Presley gathered at Sun Recording studio in Memphis, Tenn., where three had launched their careers and Lewis was about to do so. The group, the only time the four ever performed together, held an impromptu jam session, about which a reporter who was present at the time wrote, “this quartet could sell a million.”

Now there is a juke box type musical about that momentous event (which the screen on stage before the show proclaims “made rock and roll history”), written by Colin Escott and Floyd Mutrux and directed by Eric Schaffer.

This could be a ho-hum, just like every other juke box musical, but it has an outstanding cast as the quartet – Martin Kaye as Jerry Lee Lewis,  Lee Ferris as Carl Perkins, Derek Keeling as Johnny Cash and Cody Slaughter as Elvis Presley. Unlike the cast of “Jersey Boys,” the men are all gifted musicians and don’t just play the roles, they play the music as well. (So important is this that even the understudies get their photos and bios in the program)

Christopher Ryan Grant is Sam Phillips, the visionary owner of Sun Records, who saw potential in these poor boys who showed up at his studio with a new idea about music.

Kelly Lamont has the thankless task of being Presley’s girlfriend. Her role is completely superfluous and though she gives a dynamite performance of “Fever” it seems like something stuck in just to get a woman into the cast.

Billy Shaffer and Chuck Zayas round out the cast, as back-up musicians. Zayas in particular twirls a mean bass.

This is a show that is all about the music. “Blue Suede Shoes,” “Folsom Prison Blues,” “Great Balls of Fire,” “See You Later, Alligator,” “Hound Dog” — as well as country songs and spirituals like “Peace in the Valley” and “Down by the Riverside.” There is a thin plot to give Phillips a chance to guide the piece, but really everyone is there to hear the music. And nobody will be disappointed.

In 1956, Presley’s star was on the rise (funniest line of the night, after complaining of his treatment in Las Vegas, Elvis says “I’ll never play Las Vegas again.” It got a big laugh from the audience.). He had just signed with RCA, Cash was about to sign with Capitol. Jerry Lee Lewis was about to burst on the music scene (and we all know how that went!)

While it may be thought that Presley would be the most memorable in this production, actually it is Kaye as Lewis who steals the show. He’s a brash young kid, convinced of his talent and determined to make people know how talented he is. Today he would be diagnosed as having ADD, as he can’t keep still, and can’t stop breaking into incredible piano riffs when he’s supposed to be filling in the background.

Keeling has the deep voice that we identify with the later in life Johnny Cash, though oddly enough the section of the real recording made in 1956 shows that booze and cigarettes had not yet affected the timbre of Cash’s voice at that time. Still, you want to wallow around in those great low notes that Keeling gives us.
Slaughter must grease his hip joints after every performance, so fluid is his body movement. Some of his poses are amazing.

By the end of the show, the whole audience was on its feet clapping and singing along and remembering when we were all part of the birth of rock and roll. I hadn’t seen my husband so happy at a musical in the 12 years of my time as critic!