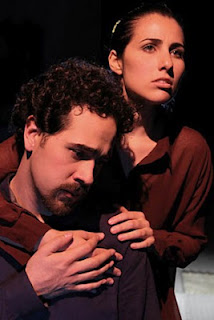 The Orpheus myth has been told and retold ever since the lyric poet was first mentioned in the sixth century B.C. Greeks venerated him as the greatest of all poets and musicians.

It was Virgil who introduced Eurydice, the wife of Orpheus, who dies in a fatal accident. Orpheus was so distraught that he travels to the underworld to bargain for her return to life.

As the story goes, he played such a sad song for the gods that their hearts were moved and they allowed Eurydice to return with Orpheus to the upper world, on condition that Orpheus walk out without looking back to make sure she is following him.

Being human (and this being a story with a moral), Orpheus succumbs to temptation, looks back, and Eurydice vanishes forever.

Many variations of the story have been presented in the modern day. There have been at least 30 films using the Orpheus theme. “Black Orpheus,” for example, was the Brazilian movie made by Marcel Camus, which sets the story in modern-day Rio de Janeiro during Carnaval.

Sarah Ruhl’s “Eurydice” (recently presented by Acme Theatre Company in Davis) tells the story from the woman’s point of view, where we learn that in the underworld she is reunited with her father, whose love for his daughter is so strong she chooses to remain with him rather than follow her husband back to the upper world.

Now the Davis Shakespeare Ensemble takes a new look at the story, giving it a fresh new twist with “Relapse, a Retelling of the Orpheus Myth with Shakespeare’s Sonnets” now being presented at the Natsoulas Gallery.

In a memorable performance by Gia Batistta and Bob Salas, the focus is once again on the story from the point of view of Eurydice and the action is based on the movement (by movement director Gabby Battista), which is both mechanical and fluid, the dialog coming from the sonnets of Shakespeare.

We see Eurydice as a vibrant woman, mesmerized by an opening in the floor that seems to be giving her some sort of energy or revitalization. Her movement is disrupted by the abrupt entrance of Orpheus, whose movements are much more sharp and serious.

She exits and he brings in a box, which he places right on top of the space that Eurydice was just playing with. He then exits and she discovers he has ruined her source of energy/self-empowerment.

We watch Orpheus vacillate between his love for his wife, his muse, whom he puts on a pedestal, so dependent is he on her inspiration for his creativity. The pedestal has the effect of keeping her tied to the writer and squelching her own freedom.

The result of her inhibition is the ultimate death of Eurydice. In a beautiful and moving moment, we watch the woman singing a beautiful song as she slowly begins to walk into the underworld, while Orpheus bemoans her death.

As in the myth, Orpheus travels to the underworld to bring her back and ultimately, as the pair begin to return, Eurydice speaks to Orpheus, causing him to turn around, and Eurydice regains her freedom.

Battista and Salas have beautiful chemistry and create, once again, a moving portrait of the star-crossed lovers and the tragedy that results from a lopsided love where one strives to dominate the other, to the detriment of both.

As Battista sees her role, “I felt inspired to call attention to the gender problems in this story, and really bring out how much Eurydice is objectified by Orpheus as he ultimately uses her up — leading to her death, solely for his own benefit.

“I also wanted to explore the idea that he is not going to the underworld to save her, but to save himself. I wanted to bring out the idea that Eurydice is strong enough to make her own decision of her fate as she chooses to stay in the underworld and does not need to be rescued, because she has found new peace and freedom with herself.”
Posted by Bev Sykes at 4:38 PM