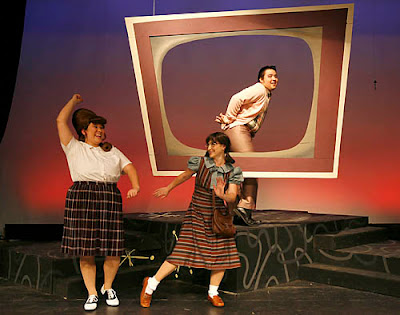 You just can’t stop the beat going on at the Davis Musical Theatre Company these days. A sparkling new production of “Hairspray,” directed by Jason Hammond, opened last week to a sold-out house of cheering fans, whose enjoyment of the show only served to heighten the feeling of joy as the show came to an end.

“Hairspray” is a stage show based on the 1988 John Waters film, brought to the stage with a book by Mark O’Donnell and Thomas Meehan, music by Marc Shaiman, lyrics by Scott Wittman and Shaiman. DMTC has created a big show with a cast of almost 40 and a 17-piece orchestra. Sets by Mark and Christine Deamer are representative of the era (1960s Baltimore) rather than literal, and give the whole stage kind of a “Jetsons”-esque cartoon-like appearance, which allows for moving the various set pieces in and out easily.

This is the story of idealistic Tracy Turnblad (Eimi Taormina) who just loves to dance to the music on “The Corny Collins Show,” modeled after “American Bandstand,” and featuring Matt Taloff as Corny Collins. Her favorite day of the month is “Negro Day,” when black kids take over the set. She loves their music and is staunchly in favor of integration. Though there is a story line of racial inequality, integration, interracial friendship and love, it is Tracy’s story, that of a social misfit who desperately just wants to be herself, that takes center stage. Tracy is a girl with a big dream who isn’t going to let the fact that she can’t fit into a size 2 rain on her parade. She believes in the goodness of people, the equality of everyone and in taking a stand for what you know is right.

I have watched with pleasure as Taormina has risen from bit parts to more substantial roles with DMTC. With “Hairspray,” she has come into her own fully as a leading lady. She simply makes this show, with an irrepressible personality and a sparkle that just won’t quit.

Tracy’s mother is Edna, a laundress who once had dreams of fame and fortune, but as her weight has soared, her self-esteem has dipped so low she “hasn’t left the house since Mamie Eisenhower rolled her hose and bobbed her bangs.” The loves of her life are her daughter Tracy and her husband, Wilbur (Andy Hyun), a novelty store owner. Edna is afraid her little girl is going to be hurt by trying to follow her dreams in a world where thin is in.

The role of Edna was played in the movie by drag queen Divine and on the stage by Harvey Fierstein. Stepping into the house dress and pumps for DMTC is Scott Minor, who puts a lot of oomph into his characterization.

Hyun, is, of course, wonderful in his role as Tracy’s father, the only negative being that the age disparity between himself and Minor can’t be solved with gray for his hair. But if you can get past the visual, he’s great.

Outstanding is Danielle Hansen as Tracy’s best friend, Penny Pingleton. Everybody should have a BFF like Penny. She begins to come into her own when the sight of Seaweed Stubbs (Erik Catalan) sets her heart going pitter-patter.

Seaweed’s mother, the rhyming couplet-spouting Motormouth Maybelle, the host of the show on “Negro Day,” is given a dazzling performance by Deborah Hammond.

Emily Jo Seminoff is another young actress whose progress I have enjoyed watching at DMTC. In this, she becomes the bad girl, Amber Von Tussle, the most popular girl (she thinks) on “The Corny Collins Show” and ready to assume the crown as Miss Hairspray. She plays the role to the hilt.

Patricia Glass is Amber’s mother, the producer of the show, who is certain her daughter will skyrocket to fame and is willing to do anything to make that happen. Together, Seminoff and Glass are the villains you love to hate.

Of all amazing wigs in this production (designed by director Hammond), Glass may have the most bizarre. It’s difficult to look at its sharp angles and not think of the Farrelly brothers’ comedy film, “There’s Something about Mary.”

“Hairspray” takes the audience back to a more carefree time, and when the cast sings the finale, “You Can’t Stop the Beat,” Tracy has won the hearts not only of Baltimore, but of Davis as well.
Posted by Bev Sykes at 3:26 PM