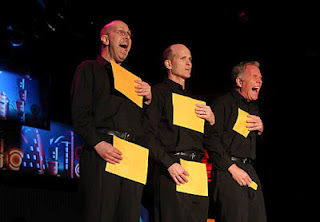 There are some for whom “Triple Espresso,” the new “highly caffeinated comedy”at Sacramento’s Cosmopolitan Cabaret, may not be their “cup of tea” (pun intended), but it’s important to remember that a cabaret show is not the same as a show you would expect to see in a theater.

If you are into laughter, an intimate setting, impromptu audience participation, and some broad, low-brow humor, you’re going to enjoy this production.

Early in 1995, Bill Arnold, Michael Pearce Donley and Bob Stromberg, three successful solo performers who admired each other’s work, gathered over coffee, never knowing the full impact that caffeinated brew would have on their future.

They decided to write something they could perform as a trio — something fun, something unusual, something that would make people laugh so hard they’d snort and embarrass themselves.

I didn’t see any snorting at the Continental Cabaret, but there was no doubt the audience was having a great time, and doing more than their share of tittering.

You can’t argue with success. In the past 15 years, “Triple Espresso” has entertained more than 1.7 million people in 50 cities in six countries in three languages (English, German and Flemish). The show continuously ran for 12 years in Minneapolis and 10 years in San Diego.

Arnold, Donley and Stromberg have opened the Sacramento run and will play the roles until July 10, when they are replaced by another trio, to run through July 22. Some 30 actors have been trained to take on the roles, making it possible to have the show running in several locations at the same time.

Hugh Butternut (Donley) is a lounge lizard, who has been the pianist at the Triple Espresso Coffeehouse for some 20 years. He wears colorful sequined jackets, has a big smarmy grin and a patronizing manner as he invites the audience to sing along with some of his favorite musical numbers from the ’70s.

To celebrate his 20th anniversary, Butternut has invited his two former partners, Bobby Bean (Bob Stromberg) and Buzz Maxwell (Bill Arnold), to join him for the occasion. He is hoping to heal the rift that occurred during an embarrassing incident on “The Mike Douglas Show.”

Bean, who has the personality of a used car salesman, is all smiles and joy at seeing his old partner. Maxwell, however, is sullen, angry and determined not to participate in the grand reunion. It all goes back to the TV appearance and little bits and pieces of information continue to drop throughout the show, until finally all is revealed in a hilarious number toward the end.

The trio (well, two of them anyway) try to relive the glory days of their success, though their success was more of a “I coulda been a contender” type of memory. They never really hit the big time … and they blame it on that Mike Douglas incident.

In flashbacks, each man reprises the high point of his talent — Bean’s attempt to hit it big in Africa, doing a funny medley of old songs sung with a tribal beat.

Maxwell is a laid-back, inept magician doing some of the funniest magic you’ve ever seen. (It takes great talent to be that bad!)

This is a corny show that will keep the cabaret crowd laughing. After the show, the audience has an opportunity to meet the performers in the lobby, and pose for photos.
Posted by Bev Sykes at 6:37 PM