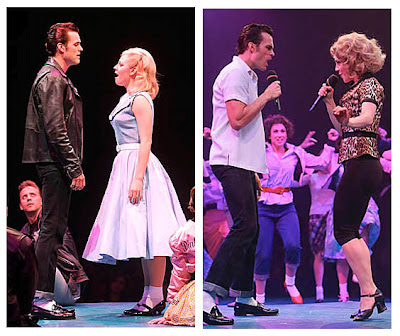 It was nice to see the Wells Fargo Pavilion filled to near capacity as Music Circus began its 2012 season with a high-octane, high-energy production of “Grease,”directed by Glenn Casale.

This old chestnut by Jim Jacobs and Warren Casey opened on Broadway in 1972 and ran for 3,388 performances at three different theaters. The subsequent movie was a runaway hit for John Travolta and Olivia Newton-John
.
Fortunately, this is a show that is filled with snappy tunes (if not exactly always intelligent lyrics — “shoowop, shoowally, wally, yippity, boom-de-boom, chang-chang, changadee-chang-chibop, that’s the way it should be, wahoo, yeah” — interesting characters, and lively dances that keep the toes tapping and the brain kind of not thinking about the plot of the show.

In these politically correct times, what would be the chance of getting a play produced that dealt with a wholesome young girl falling for what she thinks is a wholesome young man, who turns out to be one of the “greasers” at her school, and ultimately realizing that if she wants to fit in all she has to do is abandon all of her moral values, don a skin-tight outfit and spike heels, pierce her ears, poof up her hair, learn to smoke and drink and start undulating around the guy?

Now she fits in, she has friends, she has a boyfriend and everybody lives happily ever after. It’s a show I really want to hate, but somehow can’t, because it’s so darn much fun.

So I won’t dwell on the plot. I’ll just think about the fun on stage, the performances and the infectious tunes.
Though “Grease” focuses on Danny and Sandy, this is really more of an ensemble show than one would imagine. There are 15 in the cast and each gets his or her turn to shine throughout the evening. There is no denying that it stretches the imagination to think of any of these actors as high school students — but if “Glee” can make it work with 25- to 30-year-old “teenagers,” so can Music Circus.

And make it work they do. Kirsten Scott is sweet and innocent as Sandy and you feel her discomfort when confronted with the hard-edged drinking and smoking “Pink Ladies.” Her “Hopelessly Devoted to You” is a song that was not in the original stage show, but was written by John Farrar for the movie.

Lesli Margherita (Rizzo) could not be more different from Sandy, with a brittle, hard edge to her that hints of a difficult life. And yet, when she thinks she has been “knocked up” by boyfriend Kenickie (Michael D. Jablonski), her vulnerable side shines through when she defiantly belts “There Are Worse Things I Could Do.”

Jablonski has one of the high moments of the show, as he drives onto the stage in his shiny hot rod, “Greased Lightning.”

Melissa WolfKlain made an impression as Jan, one of the Pink Ladies. Her winning smile and perky attitude were difficult to ignore whenever she was on stage.

Brandon Albright has the macho swagger of Danny Zuko, who’s really in love with Sandy, but is a slave to peer pressure. Unable to admit his feelings to his greaser buddies, he treats Sandy like any other good-looking girl in school. When she finally turns up in her sexy outfit, he is able to admit “You’re the One that I Want.”

If one doesn’t think too carefully about the thin plot of this show, or the age of the “teenagers,” and just concentrates on all the elements that make it up, “Grease” is a delightful evening of theater that will send you home humming at least one of its songs.