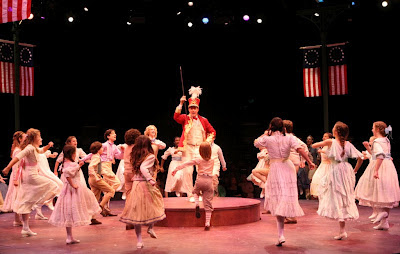 Last night I had one of those special theatrical moments that I will remember for a long time. It was opening night of Music Circus’ 20th production of “The Music Man,” one of my favorite musicals. Shirley Jones, who originated the role of Marian Paroo on Broadway and who played the role in the classic movie, was playing Marian’s mother, Mrs. Paroo. Her real life son, Patrick Cassidy, was doing the role of Harold Hill.

At the end of this wonderful production, when all the bows had been taken, Ms. Jones took the microphone and shared memories of making the movie with actor Robert Preston. She then sang a brief duet with her son, to tumultuous applause. It was a real “wow” moment and brought down the house.

There were a lot of “wow’ moments in this rollicking, delightful production, directed by Glenn Casale. After the always wonderful opening number, of traveling salesmen on a train complaining about the swindler Harold Hill, who has ruined so many towns for them, the entire town of River City, Iowa, explodes onto the stage with “Iowa Stubborn.” Such a colorful, tightly knit production number with lots of fresh-faced earnest young people mixed in with all the adult characters.

There follow all the scenes in which Hill convinces the town it needs a boys’ band and collects the money for instruments, uniforms and instruction books, all with the knowledge that he will be long gone from the town before the parents discover they have been conned.

Cassidy is a suave Hill, who plays the role of a slick swindler with great panache. It is easy to understand why he has a girl in every town.

If I confess a guilty secret, Shirley Jones has always been the only Marian Paroo for me, all others paling in comparison. How fortunate, then, that Brandi Burkhardt is so wonderful that I easily accepted her in the role. With an amazing voice and a no-nonsense personality, she makes the perfect match for Cassidy’s Harold.
Jones herself, of course, is great as Marian’s mother, the widow Paroo. Loved her Irish accent and her duet with Marian was lovely.

Young Winthrop Paroo, Marian’s shy, lisping younger brother is played by Carter Thomas, who has a lengthy performing resume and is a member of actors’ Equity. He is simply wonderful. He takes command of the stage in “Wells Fargo Wagon,” and is adorable in “Gary, Indiana.” While perhaps a bit tall for a 10-year-old, it didn’t matter when he began to perform.

The feuding members of the town’s school board, Jacey Squires (J.D. Daw), Ewart Dunlop (Jack Doyle), Oliver Hix (Michael Dotson), and Olin Britt (Joseph Torello) are a wonderful hit as a barbershop quartet.
Music Circus favorite, Ron Wisniski is Charlie Cowell, the anvil salesman, determined to bring Hill to justice once and for all and plays it to the hilt. (My favorite line: “anvils have a limited appeal.”)

“The Music Man” always makes me feel happy and, based on the filled theater last night, and the report that the show is almost completely sold out (though there are still a few tickets left), there are lots of others who agree with me. As productions go, this Music Circus production is one of the best. 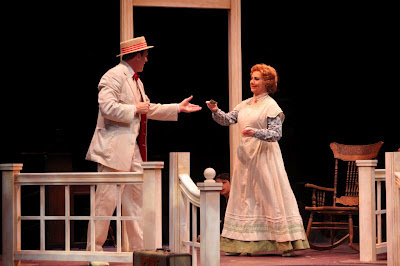 Patrick Cassidy and Shirley Jones
Posted by Bev Sykes at 9:00 AM