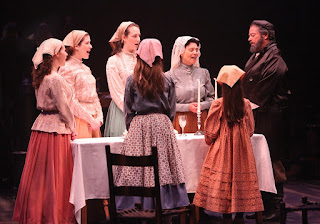 Music Circus is presenting “Fiddler on the Roof” this week, directed by Glenn Casale.

“Fiddler” is one of those musicals that lulls you into a sense of complacency and then hits you over the head with its message.

Most of the first act is fun and funny, from the spectacular circle dance (“Tradition”) that opens the show, through the dreams of young girls for a perfect husband (“Matchmaker, Matchmaker”), to the personal relationship of a poor milkman with God and his conversations with the almighty (“If I were a rich man”) to the uneasy, but cordial relationship between the Jews and the Russian soldiers (“To Life”), to various examples of young love and the beautiful wedding of the first daughter.

Just when you have laughed and cried sentimental tears and are feeling good about this small community of the fictional village of Anatevka in 1905 Czarist Russia, it all turns dark and remains dark through the end of the show.

Based on the stories of Sholom Aleichem, this is the heartwarming tale of Tevye (Bob Amaral) and his wife Golde (Adrienne Barbeau) and their five daughters. Tevye struggles to balance his deep faith with the realities of a changing world, a task that is sometimes as shaky as a fiddler on a roof.

Amaral brings depth to the role of Tevye and when he glances up into the lights and begins his conversations with God, you believe he really sees something up there. His anguish over the marriage of favorite daughter Chava (Kristen J. Smith) to Russian soldier Fyedka (Will Taylor) was palpable.

Stage and screen star Barbeau, who began her career with acting classes at Music Circus, made her Broadway debut as Hodel in a 1960s production of “Fiddler.” Now she returns as Tevye’s wife, Golde, particularly good in the duet “Do You Love Me?” where she gradually realizes that after 25 years she has come to love this man who was an arranged marriage.

Music Circus favorite Helen Geller is Yente, the matchmaker, determined to find the perfect match for every unmarried person in Anatevka.

Lauren T. Mack may be one of the best Tzeitels I’ve seen. Tevye’s daughters usually kind of blend together for me, but Mack stood out as a strong woman, with a touch of her mother’s sharpness, a woman who will rule her house with a firm hand and who is not afraid to stand up to her father when he attempts to marry her off to Lazar Wolf, the Butcher (another Music Circus favorite, Ron Wisniski).

Tzeitel’s intended, Motel the tailor, was given a good portrayal by Allen E. Read.

Jordan Bondurant is a memorable Perchik, the idealistic tutor who wins the heart of Hodel (Leah Horowitz).

There are wonderful moments in this production, particularly the Sabbath scene, where members of the town gather all over the theater to join in the action on stage, candles flickering softly as they sing the “Sabbath Prayer.”

It was another sell-out crowd on opening night and ticket sales are brisk. This is a wonderful production, so order your tickets soon!
Posted by Bev Sykes at 8:42 AM