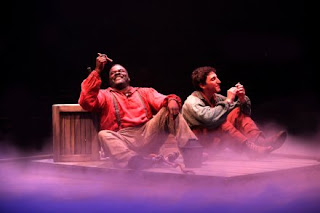 It was a surreal experience attending Music Circus’s “Big River” in a week where we are still reeling from the slaughter in Charleston, S.C., which has ignited an active debate over the display of the Confederate flag and the use of the N-word.

“Big River,” with book by William Hauptman and music and lyrics by Roger Miller (who won The Tony and Drama Desk Awards for his work), is a retelling of Mark Twain’s “Adventures of Huckleberry Finn,” the story of two runaways — Huck Finn, fleeing his cruel father, and Jim, a runaway slave, who travel together and become good friends. The story is set sometime prior to the Civil War. (Twain, who published it in 1884, was vague about the exact date.)

Needless to say, slavery plays a big part in this play and the slave scenes feel emotionally raw, particularly this week. The language, true to the period, is offensive to our ears today. The reaction of the audience, with spontaneous applause when Jim’s chains are removed and he wins his freedom, was, I felt, an indication that the whole audience was feeling the same raw emotion.

This is an outstanding production, with a superb cast. Ben Fankhauser is a bit old to be playing the 13-year-old Huck Finn, but he is a real pro who commands the stage, with a great voice that does particularly well in the ballads and in his duets with Jim (Phillip Boykin).

Boykin is definitely old for the role of Huck’s companion, though the age difference melts away with Jim’s back story of having been separated from his wife and children, and with the paternal role he takes in Huck’s life.

And what a voice! I’m sure the roof must have been vibrating with the power of his delivery in “Muddy Water” and “Free at Last.” Boykin gives Jim a quiet dignity that is at the heart of this show.

Though none of the tunes are familiar, Miller’s music (such a far cry from “King of the Road” and “Dang Me”) in this, his only Broadway musical, runs the gamut from ballad to country to hillbilly to gospel, with the spectacular Jennifer Leigh Warren as the slave Alice raising the roof in the gospel song, “How Blest We Are” to audience cheers.

James Michael Lambert played Tom Sawyer with all the boyish charm and energy that a young boy should have, though his role in this particular Twain story is a small one.

Rich Hebert is Pap Finn, Huck’s deadbeat dad who turns up unexpectedly to take Huck to live with him. Pap is a drunk and his “Guv’ment” railing against the current government is very funny, though he himself is one scary dude, and Huck finds a way to fake his own murder so that he can escape his father’s clutches.

Two delightful characters are the King (William Parry) and the Duke (Jeff Skowron), two shysters who hitch a ride of the raft with Huck and Jim and proceed to slowly re-enslave Jim before selling him back into slavery.

They are such fun to watch and their “The Real Nonesuch” is a delight. Skowron’s Shakespearean monologue (a mash-up of every famous line you remember) is very funny.

A character that seems to exist only to toss in a small role for someone disconnected from the plot of the story is that of the Young Fool, played by Dennis O’Bannion. His “Arkansas” was another high point of this show already full of high points.

While this is primarily a male-driven story, women come in for their share of stage time, with Mary Jo Mecca as the Widow Douglas and Angelina Sark as Miss Watson, the two women determined to tame the wild Huck and give him some manners.

It was so nice to see that Music Circus remembered that it has a turntable, which was used to very good effect, particularly in propelling the raft downstream in a cloud of fog.

This is a real winner for Music Circus and highly recommended.
Posted by Bev Sykes at 4:22 PM