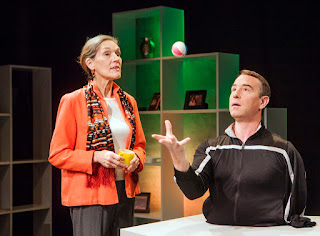 “The Jetsons” had Rosie, “Star Wars” had C3PO, “Star Trek” had Mr. Data, “Jeopardy” had Watson and Sacramento’s Capital Stage has Julian.

Human beings have long toyed with the possibility of robots who can be our helpmates, our servants and maybe even our friends. The play deals with, but doesn’t quite answer the question of, what it means to be human and explores the futuristic world of non-biological humans who look, move, talk and think like human beings.

On a beautiful set designed by Stephen C. Jones that is both modern and futuristic at the same time, neuroscientist Claire (Jessica Powell) sits with the head and torso of Julian (Michael Patrick Wiles) who, over a series of short clips, learns how to move his head in a human-like way, speak in a less robotic cadence, raise his eyebrows, smile, etc.

In each clip he is a bit more complete. He gets an arm, then another arm, and finally legs, all while he becomes more “human” and acquires more of a personality, a curiosity about the world, an awareness of self — and a bond with Claire.

Ultimately, Claire lets Julian know that he has been created for a specific purpose. A wealthy, dying man has paid more than $200 million to develop a being into which can be uploaded all his memories, his characteristics, his DNA, so that he can live on after his physical death.

He has requested a body that resembles himself at age 34, the age at which he felt he was at his physical best. Problems arrive, following the original Julian’s death, with his biological son, age 44, who can’t accept the new Julian as his father.

The plot was inspired by an experiment in Russia where a multi-millionaire, Dimitry Itskov, is having a cyborg created that is basically identical to him, with the hopes that he will live hundreds of years after his death.

The term “uncanny valley” describes “the emotional responses humans have toward robots,” writes literary manager Stephanie Tucker. “… As robots become more human-like, humans feel increasingly empathetic toward them — up to a point. When robots become too lifelike, they seem ‘uncanny,’ and most humans grow increasingly anxious and repelled by them.”

While this is a thoroughly enjoyable play, there are certain parts of it that are “off.” With all of our experience with robots in movies and on television, it is easy to believe that such a being could be created and that it could be used to duplicate a living person so that he could live a longer life.

What is not believable is Claire’s relationship with Julian. We learn that he is not her first such creation and so it makes unbelievable her growing parental attraction to him, and her obvious pain at the thought of releasing him to have the download completed, knowing she will not see him again.

It is a flaw in the writing that seems strange as she begins to treat Julian as a real person, then uncharacteristically reveals much of her unhappy personal life to him, without such incidents ever having any sort of resolution (or even explanation) for the audience, though they are of huge importance to Claire.

Later, when Julian interferes with her life, it is ironic that she becomes angry: “What gives you the right to interfere in anyone’s life …” She later goes on to remind him that he’s “not a person at all.”

And there it is — she has worked long and hard to make him as lifelike as possible, to make him ready to take on the life of her rich employer, and now that she has succeeded so beautifully, she questions whether it was a good idea and whether she has, instead, created some sort of benign monster.

Wiles gives a wonderful performance as Julian, his slow advancement to humanoid believable and his completed self, returning to visit Claire, with just a hint of malice that the original Julian may have left out of the information gathered to pass along to his robot counterpart.

Watching him walk around the stage as the blended Julian, the actor makes it clear that there is a part of the old Julian slowly blending with the new Julian.

As for Powell, she starts as the ultimate professional and by the end of the play she is hardly recognizable as the person she was at the beginning, having been overcome by the problems in her personal life and her relationship with Julian.

But the ending is unsatisfactory. Perhaps the playwright designed it that way so that we would all go home discussing the play. There certainly was a lot of discussion among the audience on the way out of the theater.