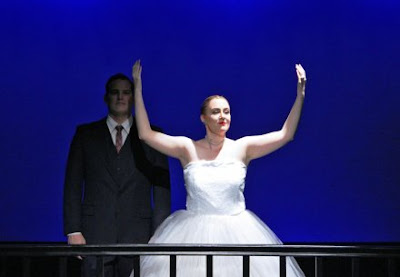 That, in a nutshell is the plot of the Tim Rice-Andrew Lloyd Webber musical, “Evita,” now at the Davis Musical Theatre Company, the final production of DMTC’s 30th season.

Last performed by DMTC in 2005, the current production is directed and choreographed by Jan Isaacson, with musical direction by Jonathan Rothman and Steve Isaacson.

The principal characters in this show are Eva Peron, wife of Argentine dictator Juan Peron, once known as “the most powerful woman in the world,” and Che Guevara (whom she never met in real life), who acts as narrator and observer of her life.

Che’s narration keeps this musical from becoming a celebration of Evita and instead focuses on how she slept her way to the top, embezzled from the government, and pulled the wool over just about everyone’s eyes, all while presenting a public persona that many people in Argentina adored.

Kate Murphy makes a fine Eva Duarte Peron, wannabe celebrity who uses her body to get what she wants, all the way up the class ladder to creating the image for politician Juan Peron. That image allows him to be so beloved by the “descamisados,” the working-class people, that it propels him into the presidency.

She is always haughty, and knows what she wants and how to get it. Her “Don’t Cry for Me, Argentina,” the show’s signature song, was lovely.

Coury Murdock was powerful as Che, giving the role the right sardonic tone, and allowing himself to become angry with so much about Evita’s life.

The role of Juan Peron often takes a back seat to that of Evita and Che, as he doesn’t have that much to do, but F. James Raasch has such a powerful voice and presence that no one would ever give him a back seat in anything.

Likewise is the voice of Magaldi (Tony Ruiz), the Argentina club singer, the first in a series of lovers Evita chooses to help her achieve fame and fortune. Ruiz is a suitably sleazy character as he woos the young girl … and then gets snared in her trap.

Dancers George Morales and Kaylin Scott did a beautiful tango, choreographed by Ron Cisneros, in the background of a nightclub scene.

Nicolette Ellis appears in the small role of Peron’s Mistress, whom Evita tosses out when she takes over. The song “Another Suitcase in Another Hall” is the loveliest song in this show, and Ellis sings with such sweet sadness that she makes a big impression.

There is a large chorus of aristocrats, army soldiers, dressers and two groups listed as “adult ensemble” and “children’s ensemble.” They may not dance with the precision of Rockettes, but Isaacson has created some very good numbers, which they execute quite well.

I wanted to particularly point out Ryan Everitt, whose dancing was more professional than the rest, and 6-year-old Gillian Cubbins (last seen as a munchkin in “The Wizard of Oz”), who is again irresistible. She’s the smallest one on stage (by a big margin), but she sings the words to every single song (some in Spanish). This girl will be one to watch as she grows up.

DMTC is trying out its new sound system with this show. There are now body mics and the stage itself is wired. This made a big difference in the balance between cast and orchestra, and this was the very best I’ve ever heard the DMTC orchestra as a result.

Jean Henderson’s costumes are, as always, gorgeous, especially Evita’s gown for the “Don’t Cry for Me” number.

The stage is a bit bare. Producers had planned to use projections of photos of Eva Peron’s life on the back wall, as they did in 2005, but somehow that did not work and so the large, blank white wall kind of intruded on everything. Except for one glitch, the movable set pieces designed by Steve Isaacson worked well.

The show will be presented at 8:15 p.m. Fridays and Saturdays and 2:15 p.m. Sundays through July 12 at the Jean Henderson Performing Arts Center, 607 Peña Drive in Davis.