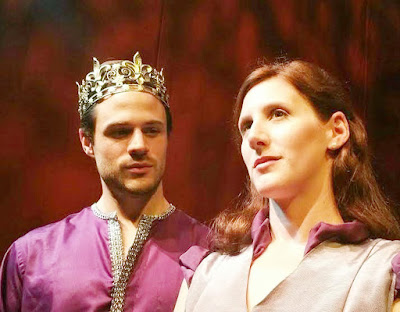 The country of Armenia has not had an easy time of it throughout history. It has been occupied by different dynasties from Ottoman to Iranian to Russian, among others. And then, between 1915 and 1918, during WWI, was the Armenian genocide, which killed 1.5 million victims and sent millions of women, children and the infirm on death marches into Syria (sound strangely familiar?) It is now a small sovereign state, bordered by Turkey, Georgia and Azerbaijan, and you don’t hear much about Armenia these days.

Playwright Aram Kouyoumdjian seeks to rectify that situation and to bring Armenia to light. His play, “Happy Armenians,” presented by California Stage and Vista Players at the Wilkerson Theater, supposes that there are parallel universes. In our universe all these terrible things happened to the people of Armenia, but in a parallel world, Armenians not only eluded the history of oppression and persecution, but actually became the most powerful country and has dominated the world for 600 years. Its main enemies are the warlike Swiss, whom they must guard against.

The only problem this parallel Armenia has is that the King (Gregory DePetro) is childless, and he will die within a month. His heir can only be his nearest blood relation, who happens to be Levon (Daniel Hubbard), a history teacher from Los Angeles, in our universe.

By some mysterious process that the beautiful scientist, Siran (Heather Lynn Smith) has been perfecting for some 10 years, Levon is taken from our universe and moved to the parallel Armenia where he is expected to learn all there is to learn about running the country in the little time the King has left.

Kouyoumdjian has been working on this idea for several years and says that “the script started coming to life earlier last year, as Armenians around the globe were commemorating the Genocide’s centennial.” He knew he wanted to write a play that commemorated the genocide without being a “Genocide play.”

And, in fact, he has done just that. “Happy Armenians” is a comedy, which may not be full of big belly laughs, but the humor is often subtle (like references to the warlike Swiss), and gets much of its humor from how various tragedies in our world were handled in parallel Armenia. (Their Wall Street equivalent is wonderful).

This production is fortunate in that all five of the cast members originated their roles in Los Angeles, so have been playing these parts for a long time and have perfected them.

As the King, DePetro is regal, sincere, and convinced that he is leaving his Kingdom in good hands. He is quite cavalier in his treatment of his enemies and at times reads like a Star Trek script.

His queen, Jade Hykush, dedicates her performance to her grandparents, who were survivors of the Armenian genocide, so for the actress, this role is very personal and we feel the intensity of her emotions as she first does not believe her healthy appearing husband is really dying and then her anguish at his death.

Hubbard, as Levon, starts out as a befuddled man who can’t understand where he is and what he is doing there, but over the course of the 90-minute play grows in confidence and willingness to assume his responsibilities on the death of the King, of whom he has become quite fond.

Smith’s performance as Siran is at the soul of the play as it is she who convinces Levon that he is indeed the right person to assume the crown. It is also obvious that she is falling in love with him, and she will be a fitting queen for him to support and help him rule the country.

Rounding out the cast is Tavis L. Baker, as Patrick, the only non-Armenian in the King’s circle, who must keep his true identity secret, for xenophobia exists in this Armenia as well. He is confidante to the King and becomes friend and advisor to Levon as well. It is clear that these two will not only continue the King’s vision for the empire, but improve on it, using Levon’s knowledge of history from his own universe.

A big part of the effectiveness of this play is the original music of Ara Dabandjian, whose recorded themes hit just the right emotion of various scenes. Likewise, the lighting design of Henrik Mansourian and Kirk Glover create a perfect atmosphere for any universe.

As we watch Levon step into his new role as King, we might wonder what the world would have been like if we had lived in this parallel universe, which seems so logical and orderly, instead of the one we inhabit.
Posted by Bev Sykes at 10:00 AM