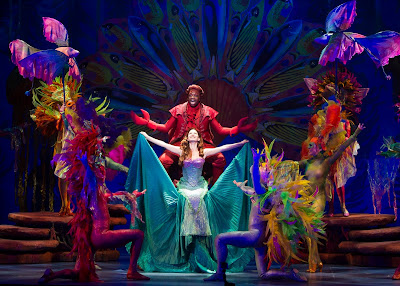 There were dozens of little girls in blue dresses with sparkly stuff on the bodice or on their shoes, some with wands or Ariel dolls in their hands at the Sacramento Community Center theater.  They were all there to see Disney’s “Little Mermaid, a visually stunning extravaganza of special effects that allows most of the cast to swim realistically in and out among the boulder and bubbles.

It’s your typical boy-meets-fish story.  Princess of the Sea longs to live in the sunshine, while on shore, the heir to the earthly kingdom is uninterested in ruling and would rather live by the sea.  A fortuitous accident tosses him into the briny deep and she rescues him, falling instantly in love.

Like Prince Charming searching for the girl to fit the glass slipper, Prince Eric sets out to find the girl he never saw, but whose voice set his little heart going pitter pat.

Meanwhile under the sea, Princess Ariel throws a hissy fit at daddy Triton and seeks the aid of evil aunt Ursula, the octopus.  She trades her voice for feet and is tossed out on the shores of Eric’s kingdom.  He finds her, but she can’t tell him who she is.  He is in the middle of a hunt for the girl with the beautiful voice, who will become his queen.

In due time, this being a fairy tale, all is resolved, Ursula gets her comeuppance, Daddy gives his permission for the inter-species marriage and everyone lives happily ever after, presumably not serving seafood for the wedding supper.

With music by Alan Menken with lyrics by Howard Ashman and Glenn Slater, this sounds like every other Menken-Ashman show you’ve ever seen (in spots exactly like “Beauty and the Beast,”) but their tunes are fun, including the signature “Under the Sea,” sung by Arial’s best friend, the delightful lobster Sebastian (Melvin Abston).

Alison Woods is a beautiful Ariel, with a winsome personality and a beautiful voice, while her Prince (Eric Kunze) is all macho ‘n’ stuff, with a great set of pipes.

Fred Inkley is a majestic King Triton, while Ursula (Jennifer Allen) is a mean and vindictive octopus with a strong voice to shatter the walls. Think Cruella de Ville with tentacles.

Comic relief (though none is needed!) is provided by Jeff Skowron as the delightful Chef Louis, preparing a royal feast for the prince’s visiting love interest.  (Skowron has also played the Pilot, Grimsby and Triton in other productions of this show).

The thing that impressed me most was the subtle but constant undulating of all of the undersea characters, indicating that they were in a moving body of water.

All is under the direction of Glenn Casale, no stranger to any Sacramento area theater patron, as he has directed most Music Circus productions over the last many years.

As much fun as this show is, and as wonderful as the performers are, the real stars of the show are the technical effects, with scenery design by Kenneth Foy, who has designed for such entities as La Scala, Radio City Music Hall, Ringling Bros. and Barnum & Bailey Circus and lighting by Charlie Morrison.

With the assistance of equipment from Flying by Foy, characters float, twist, turn, and swim realistically, the costumes of Amy Clark and Mark Koss with their flowing fins adding to the realism.

No one will be disappointed in this formulaic Disney musical which hits all the right plot points, gives you a song to hum on the way home, and is a visual delight from start to finish.
Posted by Bev Sykes at 10:13 AM