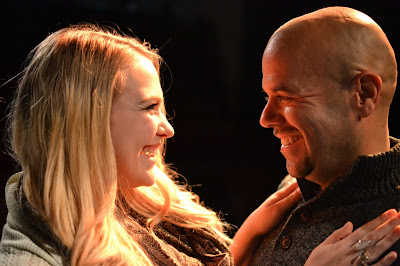 Jason Robert Brown’s The Last Five Years, at Green Valley Theatre Company is a falling in and out of love story.

The play was initially designed for each character to be on stage alone to sing, but wanting to make it more fluid and meatier, Caravalho keeps both on stage most of the time.

The end result makes the story a bit fuller.

Morrison is a marvel, a “belter” of the first order. She begins with the haunting “Still Hurting,” which has the ability to drag the audience into the song to feel her pain.

Caravalho, starting as a young man in love, brings delight and magic to the role as he gleefully talks about his “Shiksa Goddess.”

His mood darkens as the relationship begins to sour.

The music is further aided by the richness of a five-piece orchestra, which includes two cellos (and one cellist, Eimi Taormina, also an accomplished actress, stepping into the story briefly), and adds a depth that a single piano would not give.
Posted by Bev Sykes at 7:08 AM