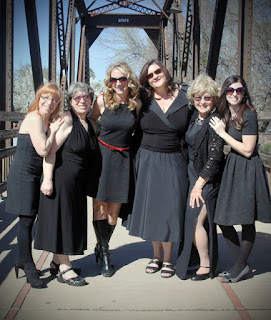 The Winters Theatre Company presents the charming and hilarious “Calendar Girls” through March 20.

“Calendar Girls,” by Tim Firth, began as a 2003 movie starring Helen Mirren. It is based on a true story of Tricia Stewart and Angela Baker, who belonged to the Women’s Institute in England. Angela’s husband, John, was diagnosed with non-Hodgkins lymphoma and died a few years later.

The women in Angela’s WI chapter decided to raise money for research on leukemia and lymphoma. An “alternative version” of their annual calendar was proposed, with the women (ages 45-65) posing nude, tastefully surrounded by projects like very large cupcakes, sunflowers, knitting projects, etc.

Now this delightful comedy has come to Winters, directed by Anita Ahuja, with a first-rate cast.

The setting is the Yorkshire town of Knapely. Lori Vaughn and Sara Wieringa are Chris and Annie, the Tricia and Angela characters. Vaughn is an irreverent take-charge person, the first to “bare it all” for the cause, while Wieringa presents a more soulful and sympathetic personality. She is the one who is more interested in memorializing her late husband than in achieving fame for the “calendar girls.”

And what a group of calendar girls they are. There’s Ruth (Linda Glick), perhaps the most straight-laced, who just can’t bring herself to pose, but will buy several copies of the calendar — and ends up being perhaps the funniest of them all.

Jessie, a retired teacher and secret firecracker, is played by longtime Davis Musical Theatre Company favorite Mary Young. It’s fair to say that in Jessie we are seeing a piece of Young we didn’t know existed. She always has had a great sense of comic timing and this role is right up her alley.

Cora (Christine Deamer) is a divorced single mother and the piano accompanist for the group. Deamer and the pit accompanist (Riley Loventhal) need to coordinate better, as she often has her hands poised over the keyboard and he has already started playing what she is supposedly playing.

Feisty Celia (Janene Whitesell), whom the girls think will need encouragement, confesses that in her younger days she once rode topless on a Harley Davidson and she is definitely in for the project.

The trick is keeping the project secret from Marie (Dona Akers), the straight-laced chairwoman of the Knapely WI. Akers always finds a way to inject ditzy comic humor into her roles and this one is no exception.

Ann Rost plays Lady Cravenshire, as shocked as Marie is to discover what the ladies of the club have been up to.

Debra DeAngelo — The Winters Express editor and columnist for 23 years, whose columns also are published on Sundays in The Davis Enterprise — is making her stage debut as Brenda Hulse, a visiting lecturer about to give a talk about broccoli to the women of the WI. It’s a small role, but DeAngelo gives it her all and does a credible job.

The men in the cast definitely play minor roles, compared to the women. Foremost among them, though, is Cortlandt Wilson as John, whom we watch deteriorate as his disease worsens. Brad Haney is Rod, Chris’ husband.

The funniest scene in the play is, not surprisingly, the photography session itself, showing the women doing various tasks around the home in the nude and being snapped by a bashful photographer (Manny Lanzaro). While the girls are (with one exception) nude on stage, the audience would never know it, thanks to the ingenious (and hilarious) ways they cover up.

The entire cast could work a bit more on their British accents, as they seem to be all over the place and very inconsistent, sometimes spot on, other times completely lacking and then back again. At least one seemed to be speaking with a Scottish accent, another perhaps from Liverpool.

However, American audiences are not fussy about such things and it does not detract from the charm, humor and pathos of this delightful production.

The set design by Jesse Akers, Trent Beeby and Ahuja is nice, but the final scene is particularly lovely.
This show is a salute to the bonds of friendship and the proof that sex appeal is not limited by age or size.
Posted by Bev Sykes at 6:40 AM