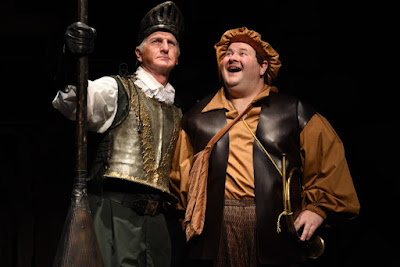 Director/choreographer Jan Isaacson admits that “Man of La Mancha” is her favorite show. The superlative production now at Davis Musical Theatre Company is ample proof of that.

From the magnificent set designed by Steve Isaacson (more opulent than most DMTC sets), to the quality of the voices, to the full orchestral sound emanating from the approximately 15-piece orchestra underneath the stage (directed by Jonathan Rothman), this is an excellent production.

Written by Dale Wasserman, with music by Mitch Leigh and lyrics by Joe Darion, “Man of La Mancha” is adapted from Wasserman’s non-musical “Don Quixote.”

The original Broadway production won five Tonys, including Best Musical, and it has been revived four times on Broadway. It has played in many other countries around the world, with productions in Dutch, French, German, Hebrew, Japanese, Korean, Icelandic, Gujarati, Uzbek, Hungarian, Serbian, Slovenian, Swahili, Finnish, Ukrainian and nine different dialects of Spanish.

“Man of La Mancha” tells the story of Manuel de Cervantes (Nathan Lacy), who, along with his companion Sancho Panza (Adam Sartain), is imprisoned by The Spanish Inquisition, for foreclosing on a church that had not paid its taxes.

As is the custom in this prison, the prisoners hold their own Inquisition of the newcomer, a mock trial, accusing the writer of being, among other things, an idealist and a bad poet. If “convicted,” he will lose his belongings, which consist primarily of a trunk of theatrical costumes and props, and an unfinished manuscript.

Cervantes’ defense is presented in the form of a play, in which Cervantes takes the role of Alonso Quijana, an old gentleman suffering from dementia, who now believes that he is the knight-errant, Don Quixote de La Mancha. In this guise, he travels the countryside with his trusty squire, Sancho, tilting at windmills he perceives as beasts and rescuing damsels in distress. He promises not to allow wickedness to flourish in the land. The delusional Quijana is an embarrassment to his respectable family.

Lacy is one of those actors who has but to utter a couple of notes of his first song to let the audience know that this is something special. His spare frame, accentuated by false bushy eyelashes and scrawny beard, give the perfect visual matching Picasso’s famous silhouette. Any solo he sings is wonderful, including the most famous song from this musical, “The Impossible Dream.”

Sartain is a nicely flouncy, slavishly loyal companion, who understands his master’s mental defects but supports him anyway. As he explains to the barkeep Aldonza (Jori Gonzales), who wonders why he is so loyal, he “really likes him.” He is especially winsome in the comic song, “A Little Gossip.”

In Aldonza, the serving wench and town whore, Quixote sees only the lovely “Dulcinea,” a fair lady whom he insists on treating with dignity, gentleness and respect, to her puzzlement, and becomes her protector. Gonzales has a rich voice in songs that express her puzzlement with this strange man “What does he want of me?” but can be exceptionally raw in her painful lament “Aldonza.” It’s a captivating performance.

Other strong performances are given by Brian McCann as the Padre (another fabulous voice), Steve Isaacson as The Governor (so nice to see him back on stage again), and Coury Murdock as The Duke/Dr. Carrasco. His powerful voice commands any scene in which he appears.

Quijana’s niece Antonia (Rachael Sherman-Shockley) and his housekeeper (Dannette Vasser) are very funny as they attempt to convince the padre that they are only thinking of the old man’s welfare, not his money.

The father of Mario Rodriguez, one of the muleteers, was the head muleteer in the original 1965 Broadway production and understudied Richard Kiley as Don Quixote. The original 50-year-old whip used on Broadway is on display in the DMTC lobby.

(It should be noted that while the play implies that Cervantes is going to his death as he is called before The Inquisition tribunal, he actually died of diabetes in Madrid in 1616.)
Posted by Bev Sykes at 7:00 AM