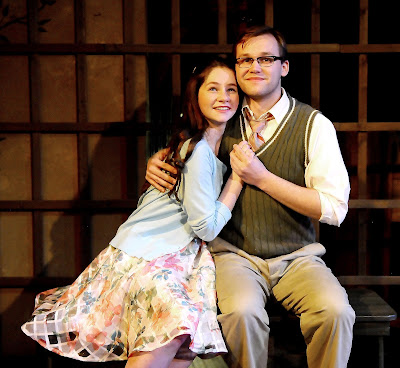 “The Fantasticks” is the longest running musical in the world. It ran for 42 years (more than 17,000 performances) off Broadway. A revival opened in 2006 and is still going strong. As of 2010, its original investors have earned 240 times their original investments.

The musical has played throughout the United States and in at least 67 foreign countries. Now it is playing at Sacramento Theatre Company in a production that should not be missed.

This is a 1960 musical, with music by Harvey Schmidt and lyrics by Tom Jones, that tells a story about two neighboring parents who trick their children, Luisa and Matt, into falling in love by pretending to feud. As the time of their hoped-for betrothal approaches, the parents hire traveling actors to stage a mock abduction, so that Matt can heroically seem to save Luisa, ending the supposed feud between the two families.

The plan backfires. When the children discover the deception, they reject the arranged love match and separate, and, separately, wander out into the world, their experiences so painful that they return home with wiser eyes and take up where they left off.

The lesson to be learned is that parents should not meddle in their children’s love lives!

It’s a simple story; the conundrum is why it has been so popular for so along. Other than the song, “Try to Remember,” and a few forgettable songs recorded by Barbra Streisand that people may know from that recording, there is no fabulous score. There is essentially no set, no jazzy Broadway-type pizzazz, and yet people love it.

Audiences especially will love this STC production, which has a fabulous cast including the just-turned-15 actress Monique Ward Lonergan, who is irresistibly enchanting as Luisa. Despite being on stage with seven seasoned Sacramento actors, she not only holds her own, but makes this her show.

Another towering performance is given by Jerry Lee, who plays El Gallo, who narrates the story and becomes part of it later. He enters as a larger-than-life presence with a pair of twinkling eyes that engage the audience immediately.

Later, as he becomes the contractor for the men who will attempt to abduct Luisa, that twinkle turns evil and he is every bit as scary as any depiction of Lucifer you may have seen. Add to that the powerful voice, and you have a magnificent performance.

Luisa’s love is Matt (Joshua Durfey), who loves the girl across the wall their parents have erected and about whom she swoons in the manner of every 15-year-old. Durfey, making his STC debut, has an extensive Shakespearean background. He is the perfect idealistic young man, head over heels in love with this girl he has barely met.

The parents in the original show were both fathers, but in this one Luisa has a father and Matt has a mother. It does not change the story at all. Michael Coleman is Luisa’s father, well-meaning, but bungling. Amanda Goldrick (an Ann B. Davis doppelganger) is Matt’s mother, delighting in her plot with Luisa’s father, excited as a child when they scheme to have the young girl abducted so that Matt can come to her aid and win her affection.

Tara Henry plays the mute who becomes the wall over which Matt and Luisa communicate, and also Mortimer, the assistant thug hired to kidnap Luisa.

Gary S. Martinez, an STC favorite, is delicious as Henry, trying to figure out his role in the abduction plot and emoting all over the stage.

The intimacy of STC’s Pollock Stage helps the intimacy of this show (a character nearly fell into the lap of an audience member on opening night).

This was my third time seeing this show and I don’t remember enjoying it this much the first two times. If you’ve never seen “The Fantasticks,” it’s a piece of theater history and you owe it to yourself to catch this entertaining production.