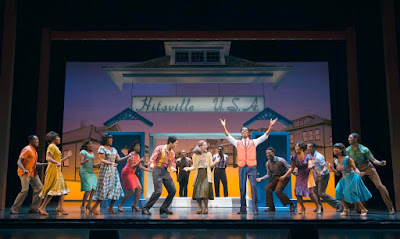 “Motown the Musical,” now at the Sacramento Community Center Theater, is the loud, flashy, audience-pleasing story of Berry Gordy, the man who gave the world Smokey Robinson, Diana Ross, The Supremes, Marvin Gaye, Stevie Wonder and the Jackson 5, just to name a few. One wonders what the music world would be like today if not for Berry Gordy.

While Gordy’s musical vision was second to none, sadly, his talents as a scriptwriter are less acute. Gordy wrote the book for this musical, which is filled with 68 Motown songs by some of the best knock-off stars around, and the script serves — barely — as a hook on which to hang those famous songs. One wonders if Gordy should have been a bit more realistic about his shortcomings and left the writing of this show to others more experienced.

But then the happy crowd was not there for the story, but for the music, as each familiar tune brought cheers from the audience from the first familiar notes.

The device used to telling the Gordy story is the 25th anniversary of Motown, for which there is a show planned in Pasadena. Gordy (Chester Gregory) is refusing to attend because he believes all of the stars he helped to make “betrayed” him by going off and making it bigger on their own. (How dare they!)

This is a good jumping-off point for meeting the young Gordy and his dream to make records, and the growth from the original “Hitsville, USA” to the more familiar Motown, a name based on the location in Detroit, “Motor City.”

While covering the 25 years of the growth of African-American music, the show gives a backdrop of the tumultuous civil rights movement, the assassinations of both President John F. Kennedy and Martin Luther King Jr., and so in a peripheral way, it becomes the history of black America of the 1960s.

With sensational dancing, dazzling costumes and often eerily accurate vocal imitations, the show does not disappoint.

Allison Semmes makes a wonderful Diana Ross, as she goes from a giddy star-struck teenager to the icon that she becomes. Her interaction with the audience in Act 2 is particularly good and, on opening night, she pulled an amazing volunteer out of the audience to join her at the mic. (I think Semmes was as stunned as the audience.) Ross gets the most stage time because of her years-long personal relationship with Gordy.

Jesse Nager had the audience at “hello” in his first appearance as Smokey Robinson, though like most of the other big Motown names, he pretty much takes a back seat to Diana Ross throughout the show.
Leon Outlaw Jr. may have a small role as Michael Jackson but he steals the show and was decidedly an audience favorite. He had all of Jackson’s moves down and it was almost sad to see how much joy he brought to the role, thinking of Michael’s later life.

A bittersweet moment was when Jarran Muse, as Marvin Gaye, sang an a cappella version of “Mercy, Mercy Me,” trying to explain to Gordy why he was leaving Motown.

At 2 hours and 45 minutes, this is a longer-than-usual musical. If you are a big fan of very loud concerts, you will love this show, but if your sensitive ears hurt from the amplification, you might consider ear plugs. It will make the whole experience less painful and still allow you to enjoy the music and the dancing. (Ear plugs won’t fix the script, though!)
Posted by Bev Sykes at 8:14 AM