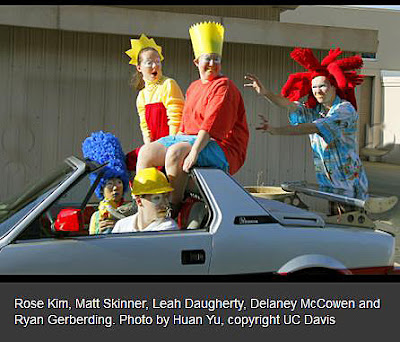 Director Mindy Cooper, University of Granada artist-in-residence, explains that “Mr. Burns, a Post-Electric Play,” now on stage at the UC Davis Wright Hall Main Theatre, is playwright Anne Washburn’s exploration of a post-apocalyptic society, questioning what survives and what doesn’t, and how things change.

Using the backdrop of the popular “Simpsons” episode “Cape Feare,” the play, sometimes clearly, sometimes muddily, takes us through a dystopian society that has undergone great destruction and shows how the survivors cope.

The play is structured into three scenes: shortly after the event (whatever it was) takes place, the second seven years later and the third 75 years later.

It’s difficult not to think of Ray Bradbury’s “Fahrenheit 451″ when watching the first scene. In that classic work of science fiction, all the books in the world are burned, but a small group of dedicated readers survives and each has memorized his or her favorite book and is now teaching it to a younger person, so the story can continue.

In “Mr. Burns,” five survivors are gathered around a campfire (there is no electricity) and they begin to recreate their favorite Simpsons episode, “Cape Feare,” in which Sideshow Bob stalks Bart Simpson with threats to kill him (people who make lists place this 1989 episode as No. 2 in the top 10 “Simpsons” episodes). For the newly displaced and shell-shocked survivors, it’s a bit of normalcy that helps them push away their fears … for the moment.

Matt (Matt Skinner) and Jenny (Leah Daugherty) lead off, yelling lines at each other, as they try to get the show in sequence, with the nervous Maria (Rose Kim) reacting in delight.

Interrupting the fun of the group is a new arrival, Gibson (Ryan Gerberding), who has been traveling across the country assessing the damage. The action takes a very somber tone as they learn which cities he has visited and bring out their book of lists to ask if, maybe, somehow, he has come across one of their loved ones.

Eventually Gibson, too, joins the others in remembering a beloved television episode.

Others in this group include Delaney Leigh McCowan as Colleen and Zach Padio as Sam. These six actors will continue to take similar roles in the subsequent two scenes.

Over time, this “Simpsons” episode takes on almost cult status, first seven years later (in the most muddled of the three scenes) as performed by one of many groups of “Simpsons” episode re-enactors. Their performance includes reminiscing about food and drink they once had (“at this point all I care about my imaginary alcohol is that it is aged”), obsessing on where Diet Cokes have gone (“I know a guy in Wichita who has a stash of Diet Cokes and do you know what he’s selling them for? Lithium batteries. Two a can.”) and comparing their productions of the “Simpsons” episode with other companies’ productions.

Gerberding takes on the role of a menacing Sideshow Bob in this scene while Padio becomes Bart, Skinner is Homer, Kim is Marge (carrying the blue Marge Simpson wig instead of wearing it), and Daugherty is Lisa. In this scene, the cast is also joined by Danika Burmester, in-law of the legendary Davis theater family, as Quincy/Wife (and Edna Crabapple in Scene 3).

After 75 years, “Cape Feare” has become a full-blown cult classic, with the menacing character now Mr. Burns, rather than Sideshow Bob (Gerberding again). This scene adds a host of new characters, the Nuclear Family Players, and music by Graham Sobelman (musical director) and Aaron Molho (for some reason, the music also includes excerpts from Gilbert and Sullivan).

This is not a show for everyone. It has the feel of a cult classic and “Simpsons” fans will love it, while non-“Simpsons” fans may find parts of it funny, but perhaps not get all the “in” jokes and references to the original.

The script assumes that the audience is already familiar with not only the major characters but also the minor characters, like Itchy and Scratchy and Apu. This may be why there was so little laughter in the audience, though encouraged at the start of the play to laugh loudly.

If you can find a copy of the original “Cape Feare” episode, I suspect it would greatly enhance enjoyment of this play.
Posted by Bev Sykes at 1:03 AM