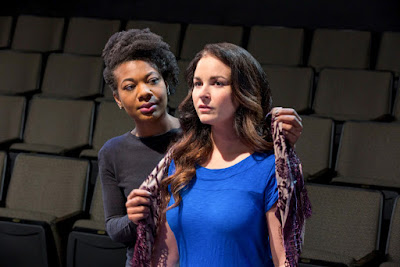 “Not Medea,” a National New Play Network Rolling World Premiere by playwright Allison Gregory, has opened at the B Street Theatre’s B3 Stage and is a work that is both funny and painfully shocking.

The play was a 2015 O’Neill finalist and included on The Kilroy’s 2014 “The List,” an industry survey of “excellent new plays by female-identified playwrights.”

Directed by Gretchen Corbett, this is a tour de force for actress Lori Prince, who plays a pediatric oncologist newly divorced, with a young daughter. Today is her allotted day to have the child, but she is frazzled and just needs a couple of hours to get away.

“Usually I go straight home and nurse a fat drink,” she says, “but not tonight. Tonight is about theater!”

It is a dark and stormy night … really! Claps of thunder are heard outside. Before the lights go down in the theater, the woman (known as “Woman”) rushes in, laden with packages, frantic to find her seat before the show starts. It’s not the play she wants to see, but she needs to get away and this is where she ended up.

She speaks to the audience about what brought her here and begins to reveal something about herself. Her child is apparently at home with a baby-sitter, but calls often, concerned about when Mommy will be home, and also about her missing Cuddle Bunny.

“I’m kinda at my wits’ end. All the questions, it never stops. Wears you down, you know? I had to get away from her. That sounds awful doesn’t it?”

As she walks onto the stage, still looking for a seat, Woman notices the Medea set and encourages the audience to leave.

“It does not end well, my friend. No, do yourself a fat favor and go! All of you, go! I’m not kidding, forget the ridiculous amount of money you just paid and get out.”

As she continues to mutter, she talks about her similarity to Medea, including the fact that her husband, too, was named Jason (though no hero, she is quick to add). She is obviously hiding a big secret that sometimes doubles her over with emotional pain.

“Poor Medea wanted to end her personal pain. Yeah, don’t we all? So what? She was a monster.”
“Chorus” wanders in to speak the lines from the play, and Woman adroitly slips back and forth between 21st-century Woman and the ancient character of Medea.

(“Chorus” is one woman, Deonna Bouye, whose role is brief, but she holds the show together and helps weave it smoothly between mythology and reality.)

Woman, like Medea, falls for Jason and her bitterness grows as Jason turns cold.
Throughout the play, Woman hints at her deep, dark secret and everything in the telling of the Medea story reveals more and more until at last, she confesses everything and is overcome with the pain of her grief.

The play has a lot of humor, but it also packs an emotional wallop. As Woman’s secret is told, the audience is moved to tears and feels her pain. This is an unusual show, but powerful, and very special.
Posted by Bev Sykes at 7:27 AM

Labels: B Street, Not Medea