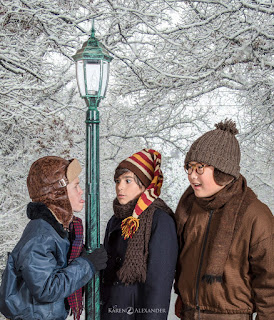 McDonald is the adult Ralph in Jean Shepherd’s “A Christmas Story,” written with Leigh Brown and Bob Clark. It is a series of delightful Christmas vignettes from the life of Ralph Parker, looking back on the year when all he wanted was a “Red Ryder carbine-action, two hundred shot Range Model air rifle with a compass in the stock and this thing which tells time.”

The play itself was written by Philip Grecian and directed, in Woodland, by Steve Mackay. It is usually in everyone’s top five Christmas shows.

It takes us back to Hohman, Ind., in 1948, when life was simple, when kids didn’t have electronic gadgets to keep them occupied and actually played on the street (snow or no snow), when they still believed in Santa Claus, when Mom made meat loaf every night except for special occasions, and Dad was kind of inept, but loved his kids deeply. Ahh for the good old days!

Ralphie Parker (Jihan Moon) desperately wants his rifle and spends the entire play trying to give subtle and not-so-subtle hints that it’s the only thing he wants. Of course, everyone tells him he will shoot his eye out. Moon is great as that 10-year-old who lives in his own world, has his own gang of friends and a bully they finally manage to best.

(One of the most fun things about this play, I noticed this time and every time I have seen it, is how much fun the men in the audience have, obviously thinking back on their own childhoods and relating to Ralphie’s experiences.)

As Ralphie’s little brother Randy, Colton McClintock is cute as a button, with few lines to say, but says them repetitively. Randy spends most of his time hiding — in cupboards, behind clothes racks, etc. People just take it for granted that Randy is hiding somewhere and nobody thinks there is anything unusual about that.

Steve Cairns is “the Old Man,” Ralphie’s dad, who is nominally the head of the household, who never says anything profound and is a bumbling fixer of things, but obviously loves and is proud of his sons.

It really is Mother (Patricia Glass) who holds things together. She’s Beaver’s mother, Jim Anderson’s wife and Donna Reed all rolled into one. She runs the house quietly and efficiently, while all the time letting her husband think he’s in charge. She even supplies most of the answers to the quizzes the old man is forever entering, while letting him know how smart he is to have thought of the answer himself.

Ralphie’s friends are Flick (DJ Michel) and Schwartz (Brady Stephens) who act so natural you would think they didn’t realize they were on stage. Iris Harshaw made a big impact as Esther Jane Alberry, who has a crush on the embarrassed Ralphie.

Ryan Cristo has the unfortunate role of Scut Farkas, the town bully. Bigger than everyone, and not terribly bright, Scut lies in wait for Ralphie and his friends as they go to school. He finally gets his comeuppance at the hands of Esther Jane, cheered on by her friend Helen (Zoe Rosendale).

Set design is by Jason Hammond and is perfect for the Parker family home. The best effect of the evening is the “scene change” from inside the house to outside. It brought giggles every time.

The lighting design of John Bowles is key in this production and it is handled perfectly, along with the sound effects of barking dogs and other off-stage sounds.

But it is McDonald who holds it all together, his relaxed, homey style welcoming the audience into the story immediately, with the ease of Garrison Keillor taking us to Lake Wobegon.

This is a perfect family Christmas play and, based on how full the Opera House was on opening night, I suspect tickets will go quickly, so order yours as soon as possible.
Posted by Bev Sykes at 8:39 AM