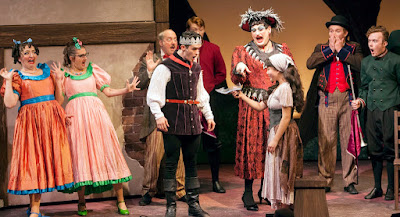 Sacramento Theatre Company is bringing back its wildly popular “Cinderella” as a Christmas gift to audiences. Based on the British pantomime format, combining music, slapstick, cross-dressing and buffoonery, this version is written by Kate Hawley with music by local composer Gregg Coffin and direction by Michael Laun.

This particular production includes three students from Davis High School. In the title role is Emily O’Flaherty, who shares the role with Madeline Perez. Both are products of STC’s Young People’s program. O’Flaherty is lovely and everyone’s mental image of a Cinderella. Her transformation from scullery maid to princess is magical.

Another Davis High student is 10th-grader Jimin Moon, playing Knickers, best friend to Cinderella (with a big crush on her). Moon alternates in the role with Luke Crabbe.

Rounding out the DHS presence is James Hayakawa, a member of the show’s ensemble.

The cast is headed by the wonderful Michael RJ Campbell as the formidable stepmother Mrs. Baden-Rotten. In the days when STC also filled the roles of the evil stepsisters with cross-dressers,
Campbell was the whiny, pouty zaftig sister Goneril. He now fills his mother’s big shoes and is even more fearsome — the character you love to boo.

As Baden-Rotten’s daughters, Emily Serdahl as Goneril and Brandi Lacy as Regan are ugly, spiteful and utterly hilarious, especially the contortions they go through to try to convince the prince that theirs is the foot to fit that famous glass slipper.

Making his STC debut, Sam C. Jones is positively charming as the prince who would rather hunt than think about girls. He and O’Flaherty have a nice chemistry together, even if he can’t recognize her when she’s all dressed up at the ball.

His best friend is Brian Bohlender as Dandini, who enjoys a few hours wearing the princely crown so Charming can be just one of the guys.

Others in the cast are equally endearing, including Michael Coleman and Andrea St. Clair as the King and Queen, eager to find Charming a wife. St. Clair can be seen dusting the castle so well she forgets to take off her apron, and then is aghast that her guests might have seen her. Coleman is a laid-back king, with his crown sitting at a rakish angle on his head, more intent on letting Charming do his own thing.

Abigail Lambert (alternating with Jordan Taylor) was wonderful as the politically active anti-monarchy Little Bo Peep who wins the heart of Dandini. Her flock of sheep look more like Rockettes, as they sashay around the stage. They are a sight to behold, especially the black sheep, Leah Hassett.

Everyone’s favorite, though, may have been Jerald Bolden as the very-tall tap-dancing, picnic basket-stealing bear.

This show is certain to appeal to everyone. There is audience participation in the form of yelling out at certain times and waving hands in the air, and everyone loves the Prince’s search for the girl who will fit the glass slipper, as he goes through the audience trying it on several women and young girls.

With the opportunity to buy crowns in the lobby, everyone can feel part of the court, and after the show, the cast members line up for photos with people in the audience, particularly star-struck young children.

This is a fun way to share theater with children or grandchildren, with a show that has enough in-jokes and innuendo that adults enjoy it, too.
Posted by Bev Sykes at 9:47 AM