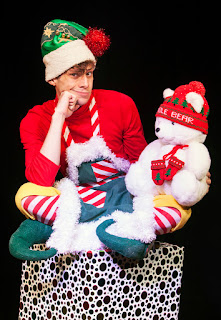 Crumpet would be the perfect elf for “Bad Santa.”
Crumpet is the name given to David Sedaris in his very funny “The Santaland Diaries,” now at Capital Stage, directed by Shannon Mahoney and starring Benjamin T. Ismail, who brings the proper blend of sardonic humor and outright sarcasm to the story.

Based on Sedaris’ experience working as an elf one Christmas at Macy’s Herald Square Santaland display, when he expected to be working on “One Life to Live” instead, Sedaris takes the audience through his interview process, “Elf Training” (using the very thick Elfin manual), and a tour of Santaland (“a real wonderland with ten thousand sparkling lights, false snow, train sets bridges, decorated trees, mechanical penguins and bears and really tall candy canes”).

He also learns about the “special areas” like the “Oh My God” corner, where parents can finally see Santa and realize how long it was going to take them to get to him, and the “Vomit Corner” where many kids throw up.

Next he is given his costume (designed by Mari Carson).

“My costume is green. I wear red-and-white striped tights, a yellow turtleneck, forest green velvet smock, and a perky stocking cap decorated with spangles. This is my work uniform,” he says wryly.
David realizes he’s not going to provide the bubbly enthusiasm of most other elves and that he probably will be a “low-key sort of elf.”

As Ismail progresses through this one-hour comedy, you appreciate his ability to make a special connection with the audience, his perfect comic timing and the agility that allows him to leap through the air with the grace of a ballet dancer.

Ismail may be better known as a director (most recently Capital Stage’s “August, Osage County”) but he also has an extensive acting résumé, everything from “Peter Pan” to “Tartuffe,” and is truly a jack of all trades.

This is not a show for children. Language and subject matter are inappropriate, to say nothing of revealing the whole Santa thing.

The show, written in 1992, was first read by Sedaris on NPR’s “Morning Edition,” and nearly 25 years later parts of it seem as fresh as ever while, in these more politically correct days, description of disabled children and some minorities, while brief, will be offensive to some.

The set design by Justin D. Muñoz is indeed a real wonderland, which will cause gasps when revealed. It is complete with any toy a little one would want. (I watched Crumpet hugging a big floppy polar bear and wished for a cuddly Christmas bear myself!)

This is the third production of “The Santaland Diaries” I have seen in the past six years and I wondered how it would be on a third visit, but Ismail has made it as fresh and new was it was when I first saw it in 2009.

It’s a wonderful choice for anyone who wants to briefly get away from the militantly cheerful holiday shows to be found elsewhere.
Posted by Bev Sykes at 11:03 AM