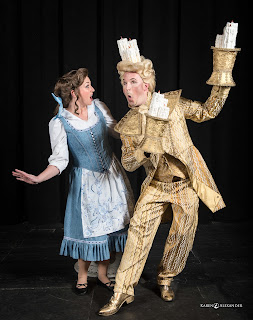 It’s a tale as old as time: She’s the daughter of the crazy old town inventor, ridiculed by the townsfolk for her bookishness and her dreams of finding her prince charming. He’s a prince with a curse on his head, hiding his hideous form away in a creepy old castle, feared by the townsfolk because he’s “different.” Spoiler alert — the two outcasts find each other, fall in love, and live happily ever after.

“Beauty and the Beast,” directed by Angela Baltezore, with musical direction by James C. Glica-Hernandez and choreography by Staci Arriaga and Eva Sarry, has waltzed onto the stage of the Woodland Opera House, there to enchant any in the audience who allow themselves to be swept into the story.

At the outset, I must give great kudos to set designers Mark and Christine Deamer, surely the best purveyors of trompe l’oeil in the area. One should carefully examine the set for Belle’s town to see what I’m talking about!

Dalton McNeely is the Beast, under a spell by a sorceress for being rude to her. He is turned into a hideous beast and all of his castle staff are slowly turning into household objects. The spell can be broken only if he learns to love — and if someone loves him in return.

Crissi Cairns is Belle, the spunky heroine who, to save her father, agrees to live in the castle of the beast forever. While she does not have a powerful voice, she has a clear, true soprano and her growing affection for the beast was touching.

McNeely could not have been more perfect as the Beast. His size made him impressive and, clad from head to toe in beastliness by costumer Denise Miles, he was a ferocious sight to see. However, watching him discover that he has feelings for Belle was lovely and when they waltz around the stage, it made the hardest of hearts melt. His first-act finale, “If I can’t love her” was a high point of the evening.

The town hunk is Gaston (Daniel Silva) who is the most handsome man in the world (according to him) and he wants to marry Belle, whether she wants him or not. Silva is suitably Trumpish in his self-grandiosity.

As his sidekick/flunky, Lefou, Eddie Voyce was appropriately subservient, but I wish they could have tamed his hair a bit.

Richard Lui is Maurice, Belle’s father, the crazy inventor who wanders off into the woods and gets lost  and then captured, at the Beast’s castle.

The Beast’s household staff always steal this show. Darryl Strohl-DeHerrera played Lumiere with the proper degree of foppishness and pulls it off despite having his arms raised above his head holding candles throughout.

Then there is Cogsworth (Erik Catalan), who is turning into a clock and dear Mrs. Potts (Kara Cummins), the teapot, with her little son Chip (Severin Sunshine Morena), a disembodied head on a tea cart. All were delightful. Morena sings the title song and it is lovely.

After the Beast allows Belle to return home to see her father, the town calls Monsieur D’Arque, of the local insane asylum, to commit him because they all feel he is crazy. Andy Hyun outdoes himself in his gleeful evilness.

This is a show that will amuse and delight children and adults alike, and at its end you will believe that miracles do happen, people can live happily ever after, and that inner beauty can tame the beast.
Posted by Bev Sykes at 4:17 PM