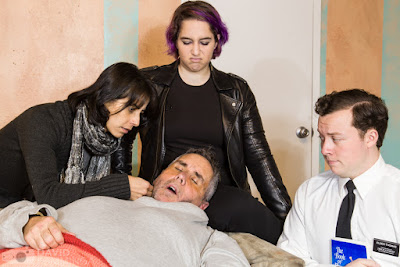 Charlie is dying. He’s 600 pounds and housebound. He is grieving the loss of his partner Alan, and he is eating himself to death. His apartment is littered with the detritus of a diet of junk food: candy wrappers, pastry boxes, KFC buckets and a vat of some sort of sweet drink.

His COPD will take him soon — maybe tonight, because he’s having chest pains. But he refuses to go to the hospital because he has no insurance.

Charlie is the unlikely hero of Samuel D. Hunter’s “The Whale,” presented by California Stage and directed by Shawn O’Neal. The play is the recipient of the 2013 Lucille Lortel Award, Best Play, the 2013 Drama Desk Award for Significant Contribution to Theatre and the 2013 GLAAD Media Award, Outstanding Theatre.

Joel Mario Rickert gives a memorable performance as the reclusive Charlie, who teaches writing courses over the internet — but doesn’t use a webcam because he doesn’t want to be seen.

The most important person in his small circle is Liz (Melita Ann Sagar), a nurse, who visits every day, brings food, takes his vitals, and tries to encourage him to go to the hospital. They have known each other for many years and truly like each other.

But it is Elder Thomas (Thomas Dean), a young Mormon on his “mission” who makes the biggest impact. Fortuitously catching Charlie in the middle of one of his spells, he helps quiet the pain and get him back on track. He wants to tell Charlie about Mormonism so that he can be redeemed before his death. Elder Thomas, though filled with Mormon zeal and that fresh-faced missionary smile, is hiding his own secrets, we will learn later.

Along comes Ellie (Soren Lipman), who is Charlie’s rebellious 16-year-old daughter, from a brief marriage to her mother Mary (Aviv Hannan). Charlie has not seen the girl in 14 years, since he left her mother for Alan, but she keeps him up to date on the girl’s progress. Ellie has tracked him down and wants to meet him. She finds him disgusting, yet at the same time fascinating. She stalks out in anger many times, but she keeps coming back.

Despite the many obvious potentially negative aspects of this play, it is a surprisingly uplifting story of love, truth, raw emotion — and maybe redemption. No, Charlie is not converted. No Ellie does not fall into his arms and tell him she loves him. But it’s all OK in the end.

Charlie is a gentle, sensitive soul, beaten down by his circumstances, who affects those around him and who, conversely, is affected by them as well. There are wonderful conversations about Mormonism (it does not come out untarnished), parenting and taking control of your life.

This is an unusual play, but unique and one that is likely to stay with the viewer for a long time to come.
Posted by Bev Sykes at 4:25 PM