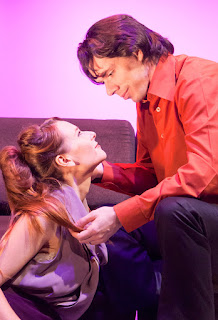 Capital Stage’s current production of Harold Pinter’s “Betrayal” is a beautifully directed (by Janis Stevens), wonderfully acted, handsomely designed story of three people that we really don’t like very much at all.

The one-act play, which starts at the end of the story, works backwards in nine scenes to the beginning. The plot closely parallels Pinter’s own life at the time. The married playwright was in a seven-year affair with a BBC reporter, whose husband was his own best friend.

The set for this production, designed by Paul Kreutz, is very stark, but somehow compelling. It is an all-white stage with three platforms that overlap each other. A bed is suggested on the top level, with a lovely shimmering golden blanket (the only hint of color on the stage).

A table, bench and chairs are moved by the efficient stage crew from scene to scene to suggest the next locale. Three large screens stretch across the back, each showing a video that lets the viewer know the year, the season and the location. (Projections are by Russell Dow.)

As the show opens, Emma (Elena Wright) is waiting in a pub for Jerry (Chad Deverman). Dialog reveals that they have not seen each other in two years, and that they had a seven-year affair. They talk of her husband (whom she is about to divorce) and Jerry’s wife and whether the spouses ever knew of their involvement.

In the next scene we meet Emma’s husband Robert (Michael Patrick Wiles), who is the quintessential example of the British “stiff upper lip,” as he and Jerry dispassionately discuss the affair with Emma and whether they should get together to play a game of squash or not.

As the scenes move backward, we find betrayal everywhere. Emma lies to Jerry, Robert lies to Emma, Jerry lies to his wife, and to Emma. They have created the proverbial tangled web and lived it for seven years, and are still living with the consequences.

Elena Wright starts the story as a somewhat nervous yet likable Emma meeting her former lover after two years, but as their conversation continues, her need for reassurance that he still has feelings for her and her apparent willingness to give it another go gradually erase that likability and she starts to be annoying.

Costumer Gail Russell has chosen a violet palate for Elena, and in every scene she is wearing a new costume, but always in the same shade of violet, which is very becoming on her.

We don’t really start to dislike Jerry for several scenes. He seems an OK fellow, until he doesn’t. Russell has created a striking series of costumes for him, in colorful pastels that shouldn’t match, but do.

Wiles, as Robert, in contrast, is in a more nondescript costume that doesn’t really stand out, which matches his personality. Wiles does well keeping his anger quietly simmering just below the surface while engaging in polite conversation with his best friend, who is sleeping with his wife.

Graham Scott Green adds a much-needed touch of humor in his brief scene as the waiter in an Italian restaurant.

Perhaps the problem with this play is that there is no mystery. We know from the beginning how the relationship ends and there is nothing much surprising about how it begins.

The play is billed as one of Pinter’s “masterpieces,” but I much preferred his “Homecoming,” also directed by Stevens, which Capital Stage presented two years ago.
Posted by Bev Sykes at 8:24 AM