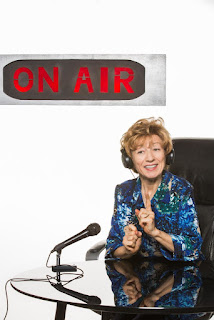 Anne O’Sullivan got the audience’s attention right away.

“People don’t look at the elderly as sexual beings. … Worse, some older people don’t see themselves that way.” Since most of the people in the audience for the performance I attended had white hair, they were interested immediately.

Like Julia Child (who worked for the OSS during World War II), the diminutive Westheimer has a more interesting back story than simply that of a cute little old lady who likes to talk about sex. In fact, though she delivers sexual advice throughout the 90-minute show, sex is actually the least interesting part of her story. The very last thing this show is is salacious.

The setting is Westheimer’s apartment in 1997, shortly following the death of her third husband, Fred Westheimer (to whom she was married for 36 years and raised two children). She is preparing to move across town and as the show opens, she is on the phone talking to one of the movers, to whom she ends up giving marital advice.

As the lights come up and she notices the audience, she hangs up the phone and begins talking to those watching. As she packs various items into boxes, she reminisces about them and the memories they evoke.

Westheimer was born Karola Ruth Siegel in Wiesenfeld, Germany, in 1928 into what seems to have been a close, loving Jewish family. Though not religious, she did get early training in Judaism by being taken to synagogue by her father, from whom she learned the lesson of always keeping a smile on her face and never allowing her negative feelings to show on the outside.

Her father was captured by the Nazis when she was 10 years old and taken to a labor camp shortly after Kristallnacht (“night of broken glass” when windows of stores, synagogues and homes were broken in the first night of a series of pogroms). Young Karola was sent to Switzerland under a program called Kindertransport, and thus avoided the fate of her family, all of whom eventually died at Auschwitz.

Life was not great for her in an orphanage in Switzerland and when she was 17, she moved to Palestine, where she lived on a kibbutz. She had her first sexual experience there … and liked it.
She joined the Haganah, part of the Israeli Defense Force, but because she was so short (4-foot-7) she was trained as a scout and a sniper. She was wounded by an exploding shell during the Israeli War of Independence in 1948 and it took several months before she could walk again.

The play continues to tell her experience trying to get an education in France and in the United States, where she eventually earned her teaching credential, something she had wanted all of her life.

Her first radio show ran for 15 minutes in 1980 and was immediately so popular that it expanded to an hour. The Dr. Ruth phenomenon was born, and continues to this day, where she still answers questions, but now through her website.

Director Montoya nicely moves Westheimer’s story through her apartment, designed by Alex Polzin. At all times, the audience feels like a visitor listening to a fascinating lady tell her story.

O’Sullivan honors Dr. Ruth and makes her a believable character rather than a caricature.

Some performances will have talk-backs following the show. Our talk-back featured a fascinating Holocaust survivor whose own story was as harrowing, or more so, than Dr. Ruth’s herself. By all means, stay.
Posted by Bev Sykes at 5:48 PM