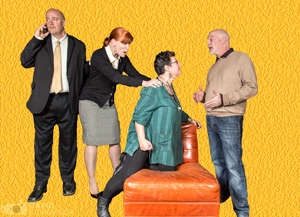 As Yasmina Reza’s God of Carnage opens at Resurrection Theater, two couples meet for a civilized discussion. Veronica (Adrienne Sher) is reading an agreement they are all to sign concerning their young sons, who have had a playground scuffle that cost one of the boys a couple of teeth. Veronica and husband Michael (Steven Minow) want to be very civilized about the damage done to their son.

Over a delicious apple clafouti (recipe included in the program), the other parents, Annette (Beth Edwards) and Alan (Shawn B. O’Neal) arrange for the boys to work out their differences.

Pleased with how reasonably they are all behaving, one parent asks “How many parents, when standing up for their children, become infantile themselves?”

Over the next 90 minutes, we find out just how infantile four reasonable parents can be as the discussion turns heated, through a series of very funny disagreements and violent attacks, as all four bare their souls, and relationships shift.

Veronica, an art historian, is a stark contrast to her husband, who runs a hardware store. The veneer of the apartment’s expensive art books falls apart when he lets loose his inner Neanderthal.

Edwards’ Annette is nervous and fearful of her bombastic attorney husband, who answers cellphone calls until his wife finally cracks.

What makes this production soar is not only Reza’s very funny script (translated by Christopher Hampton) but Natasha Hause’s crisp direction and the verbal dexterity of her strong cast, each of whom gives a spellbinding performance.
Posted by Bev Sykes at 2:31 PM