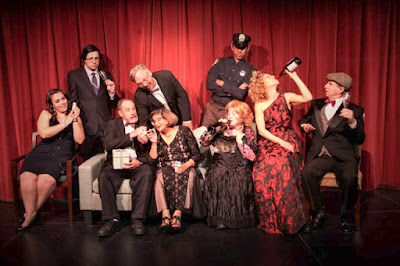 Neil Simon wrote his comedy ”Rumors” at a time when he was at one of his lowest points. He was in the process of divorce from wife No. 3 (Joan Balm), and needed something funny to occupy his mind. Work was always cathartic for him and, having written many funny things, he decided to try his hand at farce, which is a different style of comedy.

Comedy is a work of art that is amusing and intended to be humorous. Farce, in contrast, is a type of comedy that is characterized by highly exaggerated and comic situations and crude and one-dimensional characterizations. It has no other aim than creating laughter. (Farce usually also involves a lot of doors!)

By its very nature, farce requires crispness of dialogue and a quick pace to the show. The funny lines (you can’t really call them “jokes’) should come fast and furious and flow one into the other.
The fine cast of the Winters Theatre Company production of “Rumors,” directed by Linda Glick, are probably presenting a comedy, but not really a farce. While the show is enjoyable, the spark that makes a farce pop is missing.

The situation involves a couple who have arrived at the home of friends, intending to celebrate their 10th anniversary with other friends. But nothing is ready, the wife Myra and the serving staff are nowhere to be found, and the husband, Charlie, is on the floor in the bedroom with a bullet wound in his earlobe.

Simon hits a bit of a sour note with the first scene in which a guest, Ken (Philip Pittman), is upstairs with the unconscious (and unseen) host and Ken’s wife Chris (Anita Ahuja) is downstairs waiting for a call from the doctor.

Ken, who is Charlie’s attorney, keeps asking if the doctor has called yet when he does, he tells Chris not to tell him anything and to get him off the phone. Both Ken and Chris are frantic, unsure what happened or what to do to protect Charlie.

In the meantime, the other guests keep arriving. Claire (Ana Kormos) and Lenny (Jim Hewlett) are in a state because someone just ran into their prized new BMW.

Ernie (Brad Haney) and Cookie (Laure Olson) are upset that there is no food available, so Cookie, who is a TV chef (and who wears the most amazing costume you’re likely to see) takes it upon herself to prepare something to eat.

The final couple are Glenn (Manny Lanzaro) and Cassie (Michelle Novello), who arrive feuding and who squabble throughout the play.

Each person has a secret he or she is hiding, which may involve themselves or a rumor they have heard about one of the other guests, and as the lies involved in keeping the others from learning their secret mount, so does the craziness.

All comes to a head when a police officer (Rodney Orosco) comes to investigate and is treated to a highly implausible but entertaining story by Lenny that brings the whole show to an end. Almost. The final minute is a surprise for all.

Excellent in this production are Kormer as Claire, who has a real natural presence on stage; Pittman as Philip, trying to find some normalcy in a situation that is anything but normal; and Novello as Cassie, who doesn’t really have much to do but be beautiful and angry, but does it very well.

The attractive set is designed by Gary Schroeder, Jesse Akers and Sally Alexander and yes, it has all those requisite doors.

The sound, however, is a shrill negative, as there is a telephone, a doorbell and a pager, and the sound crew never could seem to get which ring was which. Each ring was repeated endlessly and was very irritating, as everyone stood around talking about something ringing, but not doing anything about it. (And at some point, someone threatens to wrap the cord of the cordless phone around someone’s neck, which made no sense at all.)

Despite Simon’s stellar career, “Rumors” has moments when his writing is just sloppy. However, this production is still fun overall and the opening-night audience was very entertained by the zaniness on stage.