Concussed: Four Days in the Dark 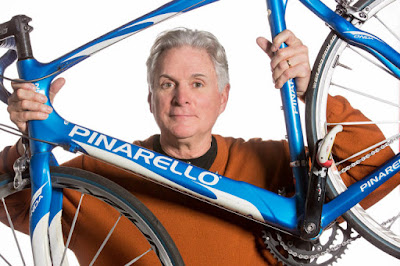 No, wait a minute. I like Jack Gallagher very much. I learned that he is very selective about the people whom he claims to love, saving that term for those in his most intimate circle. Still, I can’t help but think that I really do love Jack Gallagher.

The comedian is opening his seventh one-man show and sixth for the B Street Theatre, his last being 2015’s popular “5 Songs,” a show about which he talks in this current production, “Concussed: Four Days in the Dark,” directed by Jerry Montoya.

Anybody who likes to bike (and who in Davis does not?) will relate to this story, which talks about Gallagher’s biking habits. In fact, the stage is set with huge interacting gears and a bike and the paraphernalia related to his love of biking.

It was, in fact, his love of biking that changed his life, and that ultimately brought about this show. Three years ago, while riding his bike home, he was hit by a car and three days later was diagnosed as having a traumatic brain injury.

The doctor ordered him to bed immediately. He was to stay in a darkened room with no stimuli whatsoever. No TV, no iPad, no radio, no internet, no nothing. He needed to give his brain a chance to heal.

This play, which is both touching and very funny, is like a free association of all the things you think of when you are trying not to think. His biggest fear was that he had lost the ability to find words.
Words are his life, and knowing how to find them, manipulate them, and the ability to cut and paste in his mind while doing a show to match the response of the audience was something he had done all of his professional career. What if he couldn’t do it anymore?

He was 61 when the accident happened, so he talked a lot about getting older, and the predominantly gray-haired audience laughed and nodded in agreement as he recounted, for example, how one gets out of bed when one reaches a certain age.

He talked of parenting his two sons, Declan and Liam, and what he wished he had done differently as a father. In fact, as he began to recover he took trips across the country with each of the boys, the northern route with Liam and the southern route with Declan, just being a couple of guys enjoying being together.

The experience of having a concussion, he believes, was transformative, and he says he’s become a better person as a result. He has learned the importance of being in the moment, not always living for the future. He learned the importance of speaking your love to those for whom you really love, and he even learned a little humility, now that he needs a few notes on stage during his 90-minute shows, something he was proud of not needing before.

(He admits that he can’t remember much about “5 Songs,” though one would not have known there was anything wrong, watching that show at the time.)

Gallagher is a remarkable comedian in that he knows how to work an audience, especially one like B Street, where the audience sits on three sides of the stage. At no point did anyone feel that they were just watching the back of his head. He had a way of unobtrusively involving everyone without being overly obvious about it. It was as if we were guests in his living room and he wanted to include all of us in his conversation.

He also made you feel like he was baring his soul just for you, while telling you that he is a very private person who bares his soul only to his most trusted friends and family.

Most in the audience were middle-aged or older but I think Gallagher’s humor would appeal to just about anyone. Well, maybe not to the two 20-somethings sitting next to me, one of whom slept through the whole show while the other thumbed through the program for 90 minutes. They missed something very special.