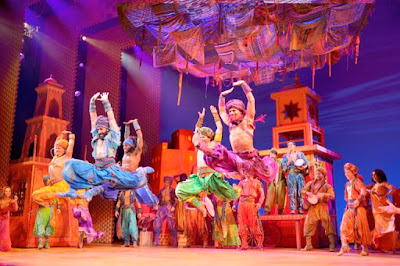 If for some reason I had to leave the theater after the opening number of Disney’s “Aladdin,” now at the Sacramento Community Center, I would have been satisfied that I had already seen an amazing, albeit short, production.

“Aladdin” opens with color, with dancing, with music, with enough sequins to make Liberace happy and with more feathers than you’d find in an aviary. You meet the good guys and the bad guys, you experience a long, scary chase scene that would do credit to “American Ninja Warrior,” and you see amazing sword fights that only get better later on in the show.

Where do you go after such a breathtaking start?

Fortunately, the only way to go is up — and up they go.

Disney’s “Aladdin” is the stage version of the 1992 animated movie, featuring Robin Williams as the voice of the Genie. It’s your standard poor boy meets princess story that ends (spoiler alert) happily ever after.

In between, there is more dancing, more chasing, more sword fights, more incredible costumes by Gregg Barnes and lots of “you won’t believe your eyes” magic. Music is by Alan Menken, with lyrics by Howard Ashman, Tim Rice and Chad Beguelin, and some of it is new to the stage production. None of the songs are particularly memorable, but are thoroughly enjoyable in context.

The role of Aladdin is played by Clinton Greenspan for four performances and by Jacob Dickey for the rest. Likewise, the role of Prince Abdullah, the Sultan, is shared between Albert Jennings and Charles McCall.

In the opening number, we meet Aladdin (Greenspan) and his buddies, Babkak (Zach Bencal), Omar (Ben Chavez) and Kassim (Colt Prattes), trying to steal from market vendors and hiding from the law.
At the same time, Princess Jasmine (Kaenaonālani Kekoa) is a very independent young lady, refusing to marry for money but determined to marry for love. She slips out of the palace and finds herself in the marketplace, where she meets Aladdin. Sparks fly and things look good until he is captured for shoplifting and she has to reveal her identity as the Princess in order to save him.

Watching all of this are the evil Jafar (Jonathan Weir) and his henchman Iago (Reggie De Leon, who steals most of the scenes he is in). They make a plot to take over the kingdom. All they need is someone who can go into an enchanted cave and steal a magic lamp for them.

The heretofore energetic production becomes frenetic when Aladdin accidentally rubs the lamp and frees the Genie (Major Attaway, who played the role on Broadway). With an almost constant patter consisting of jokes and terrible puns, milking the audience for applause, Genie dominates the show and his answer to Aladdin’s first wish (to be a prince) was just a tad over the top (maybe it was the 95 monkeys).

Sparks fly again when Aladdin and Jasmine meet once more, and their magic carpet ride was just that — pure magic — perhaps the height of the special effects.

There are more fights, imprisonment, redemption and getting your just desserts before Jafar’s evil plot is destroyed and Prince Abdullah agrees to allow his daughter to marry the pauper.

For those who like their musical instruments to be real instruments and not electronic wannabes, this show will satisfy every desire. The pit band is exceptional.

“Aladdin” closes out the Broadway On Tour series, as well as the Community Center, which will now close for renovation. The 2020 season will take place at Memorial Auditorium, 1515 J St., starting in January with “Dear Evan Hansen.”