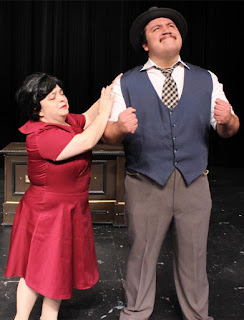 Seven and a half cents doesn’t buy a heck of a lot, but it’s enough to write an entire musical about. ‘The Pajama Game,” on stage at the Davis Musical Theatre Company, is to classic musicals what “Mad Men” was to TV. It’s a dated world, where sweatshops exist, the boss is king and raises have to be fought for. Nobody has thought of MeToo yet, but harassment is rampant.

With book by George Abbott and Richard Bissell, music and lyrics by Jerry Ross and Richard Adler, this Tony-Award-winning musical premiered on Broadway in 1954, the year that director Steve Isaacson was born. It was made into a movie in 1957, starring Doris Day and John Raitt.

You probably know most of the songs, like “Hey There,” “Hernando’s Hideaway,” and “Steam Heat,” the latter the first Broadway choreography by Bob Fosse, showing the classic style which would be so recognizable in future musicals.

The action takes place at the Sleep-Tite Pajama Factory, which has just hired a new superintendent, Sid Sorokin (Tate Pollock) who almost immediately butts heads with the grievance committee headed by Babe Williams (Morgan Bartoe). It’s not clear exactly how these two fall immediately in love/lust with each other, but it happens — though Babe vehemently denies her feelings (“I’m Not At All In Love”).

The grievance committee is concerned because they want a 7 1/2 cent per hour raise in pay. (The date of the show is shown when calculations showed that in a year’s time that would come to $852.74, which would buy a year’s supply of gasoline! It gave the audience a good, if rueful, laugh.)

Pollock says this is his “anniversary show” with DMTC, having started with last year’s “Guys and Dolls.” He has a nice charisma about him. Bartoe has a more meaty role than the feather duster she played in “Beauty and the Beast,” and she rises to the occasion. She has a beautiful voice and her duet with Sid (“There Once Was A Man,” written by Frank Loesser) was great fun.

Exter Hardy is very good as the big boss, Mr. Hasler, who wears a suit beautifully, but has the very best costume for the company picnic late in the first act. Costume designer Jean Henderson has a great sense of humor.

Hugo Figueroa is Heinzie, the timekeeper, responsible for making quotas and keeping the women working. He has the hots for Gladys, one of the secretaries, though is jealous of her relationships with other men. His duet with secretary Mabel (Dannette Vassar), (“I’ll never be jealous again”) is very funny.

Aimee Rose Santone is outstanding as Gladys, wiggling her backside provocatively at many of the males in the company. She, together with Maeve Kelly and Holly McGuinness do a great job with “Steam Heat.” Choreographer Kyle Jackson keeps the trio faithful to the familiar Fosse moves. (In a bit of fun facts, the program points out that the original Gladys, Carol Haney, broke her leg and chorus girl Shirley MacLaine covered for her. She was soon signed to Paramount Pictures, and the rest in is history!)

Matthew Evans is “Prez,” the head of the Union, and another candidate for MeToo attention. Doug Baker is Max, one of the factory’s salesmen. Amy Woodman is cute in the small role of Poopsie, but I was always afraid that her blonde wig was about to fall off.

This is a fun production and someone mentioned to me at intermission that she liked it better than the film, which has to be high praise indeed.
Posted by Bev Sykes at 12:26 AM