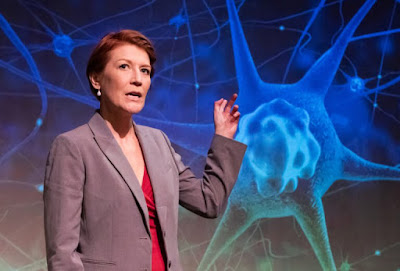 Melinda Parrett was born to play Juliana Smithton, a scientist whose research has led to a potential breakthrough which will change the lives of thousands of people. Parrett has the ability to play the cold, aloof scientist, the wronged wife, and, as the play progresses, the confused and terrified woman whose life seems to be unraveling — and do it flawlessly. What is even more remarkable is her ability to switch back and forth among those feelings seamlessly.

The structure of “The Other Place,” by Sharr White, now at Capital Stage, is a little difficult to get into, as it goes back and forth in time, with Juliana both the narrator of the piece and a character in it. But when you get the hang of it, it’s brilliant.

Things move quickly, thanks to the deft direction of Michael Stevenson, and even the many set changes are choreographed so that they are done quickly and do not slow the action at all.

We first meet Juliana at a convention in the Virgin Islands, where she has been invited to give a lecture on a new drug designed to slow the neurological degeneration associated with dementia. She is aware that as a woman she is not necessarily taken seriously by her colleagues, and she dresses the part in a business suit and begins her talk professionally until she spies a woman in a yellow string bikini sitting in the audience. The presence of the unspeaking woman becomes unsettling and eventually the object of Juliana’s derision.

Cut to an interview between Juliana and another woman (Jennifer Martin). We’re not quite sure what the interview is for yet. Through bits and pieces, we discover that she is in the process of divorcing her philandering husband, an oncologist (Jonathan Rhys Williams), who also serves as her doctor because she feels she is dying of brain cancer, as her relatives did before her.

Asked if she has flirted with ideas of suicide, Juliana sarcastically retorts: “Dating them, actually, but they won’t put out.”

There is a crisis involving their daughter, who left the home at age 15 many years before, and the man (Kirk Blackinton) with whom she supposedly left. Juliana has never seen their twins and is trying to set up a way to reconnect with her daughter.

Williams is wonderful as Ian, Juliana’s husband, who is either a philanderer or a frustrated devoted husband, strained to the breaking point, trying to help his wife. He is irritating at first, as the couple argues and he seems uncaring about Juliana’s condition, but as the play progresses and we understand his suffering, you can’t help but feel sorry for him.

These are the elements of the plot and how it all unravels, twists and turns, and ultimately climaxes at the couple’s “Other Place,” a house on Cape Cod. It’s an intense 90-minute drama that is both sarcastic and heartbreaking.

Blackinton and Martin play several different characters; Martin is particularly wonderful as the stranger surprised to find Juliana in her house, who is at first afraid and then sympathetic, responding warmly to Juliana’s needs.

It doesn’t give away the plot to reveal that some of these characters are real and some are not. It is nearly halfway through the play that the truth about Juliana’s condition slowly becomes evident.

Timothy McNamara is credited with scenic and projections design. The setting, indicated by what is seen out the windows on stage, was very effective as was the rain created by sound designer Ed Lee.

There seems to be a tendency to have more one-act, 90-minute plays these days, which can sometimes get to feel draggy by the time the play ends. This is not one of them. The action is crisp and nonstop, and by the end, there will be tears wiped away.
Posted by Bev Sykes at 9:27 AM

Labels: Capital Stage, The Other Place