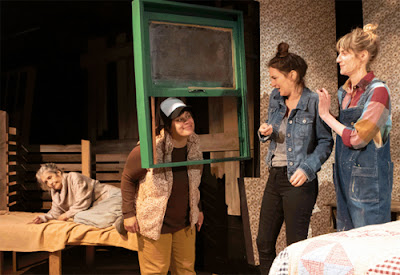 Do a Google search on “Alabaster,” the Audrey Cefaly play at Capital Stage, directed by Kristin Clippard, and you’ll get a list of “text words” to help describe it:

Now, how, you wonder, does all that fit together into one play?

Surprisingly well. This is a very funny, but very dark comedy about two women, learning how to deal with the scars of life and begin to heal.

And it’s all narrated by a sassy goat.

There is a cast of four extraordinary actresses. Stephanie Altholz is June, a folk artist who lost her family in a tornado that destroyed their barn, ripped off the front porch of the house, and left June, the only survivor, scarred from head to toe. She has not left the house in over two years and spends all of her time painting.

Alice (Susan Maris) is a photographer who comes to the farm from New York to take pictures of June as part of a project of photographing scarred women for a book showing how really beautiful they are. She has her own traumas to deal with, following the recent death of her wife, who was four months pregnant with their first child.

And then there are the goats. Amy Kelly snuck over from B Street to make her Capital Stage debut. She is Weezy, the younger of the goats and it is explained that she speaks both English and goat. Her partner Bib (Janet Motenko) is an aging goat who only speaks goat.

Kelly is a talented comedic actress, whom I have watched play a host of characters, both human and animal. She has that certain je ne sais quois that she brings to everything she plays and this goat was a perfect role for her.

In California Stage’s “Italian Opera,” Motenko played several different very verbal characters. As Bib, the dying goat, she has little to do but sleep, and as she speaks only “goat,” she has no lines. Yet, Motenko presents a sympathetic character, whose dying days are eloquent, words or not. It is a beautiful performance.

As for the humans, kudos to costume/makeup designer Caitlin Cisek, who has created June’s scarred body, both burn scars on her legs and back and ribbed scars on her face.

June uses sarcasm, bitterness and isolation to protect her from her emotional scars, until a terrifying incident opens a crack in her wall and lets her open up to Alice. Altholz gives a riveting performance.

Altholz and Maris have wonderful chemistry together. Maris’ scars are more deeply hidden, but when June needs her, her raw emotional story is very moving.

The scenic design by Timothy McNamara, lighting design by Michael Palumbo and sound/projection design by Ed Lee make this a very believable story — and whoever painted June’s paintings was wonderful.

This is a show that will make you laugh and cry and cringe, but will make you very happy that Sacramento has such a professional theater that presents such wonderful productions.