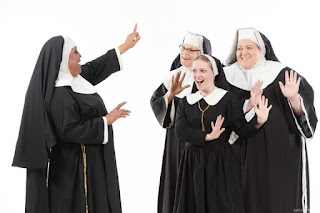 “Sister Act,” the new show at the Woodland Opera House, directed by Jason Hammond, is an absolute delight from start to finish.

Based on the 1992 Whoopi Goldberg movie, the stage show adds music by Alan Menken with lyrics by Glenn Slater. The musical turns the story-with-music movie into a musical-with-story stage show. I missed some of the story of the nuns venturing out of the convent and into the community, but the musical numbers are so much fun, it makes up for it.

Woodland has amazing talent in the cast. Deborah Hammond is Deloris Van Cartier, a lounge singer under the thumb of her gangster boyfriend Curtis (David Ewey), who witnesses a murder he commits. Fearing her life is in danger, Deloris reports to police officer “Sweaty” Eddie (Erik Catalan), who remembers Deloris from high school and hides her in a local convent under the name Sister Mary Clarence.

Hammond is magnificent with a strong voice, captivating personality and quick comedic timing. Each of the 10 numbers in which she is featured is wonderful. Over the course of the two-hour show, she goes through a transformative process that makes her reevaluate her priorities.

The role of Mother Superior has been expanded from the movie version, and how lucky we are for that. Lenore Sebastian is vocally every bit Hammond’s equal. Mother Superior is frustrated with having to hide a woman of whom she does not approve, who is such a disruption to her quiet convent. Her anguished “I Haven’t Got a Prayer,” trying to ask God for guidance, was a standout.

To give her something to do, Mother Superior puts Sister Mary Clarence in the tone-deaf choir, a group so discordant it has driven parishioners away. With the addition of a real musician, the choir shapes up quickly and becomes so popular the church is filled again, though Mother Superior is shocked by the modern twist to some of the beloved hymns.

But Monsignor O’Hara (David Cross) is pleased with the popularity of the choir, which has removed the danger of having to close the church for lack of congregation.

Sister Mary Patrick had a somewhat larger role in the movie, but Judith Boreham still brings her personality out beautifully, and Jadi Galloway, as the postulant Sister Mary Robert, is shy and retiring, but when she comes out of her shell, she displays a wonderful, rich voice. Her “The Life I Never Led” was quite poignant.

Catalan also has a powerful voice and his Act 2 costume gets the biggest laugh of the night (kudos to Denise Miles and Kathy Dixon).

Gangsters Joey (Spencer Alexander), Pablo (Miles Meckling) and TJ (Michael Davis Smith) get laughs in “Lady in the Long Black Dress,” as they describe how their manly charms will affect the nuns and help them find Deloris.

With Deloris safe, the show ends gloriously, with the nuns in Vegas-worthy habits, receiving a well-deserved tumultuous standing ovation