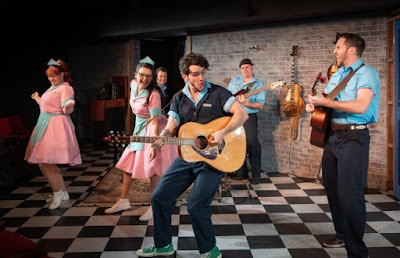 Any show with a tap-dancing accordion player has got to be fun.

“Pump Boys and Dinettes” by John Foley, Mark Hardwick, Debra Monk, Cass Morgan, John Schimmel and Jim Wann is now on Sacramento Theatre Company’s Pollock stage. This is a 1982 Tony-award-nominated musical written by a performing group of the same name. It became Chicago’s longest-running theater production for many years.

This concert-style musical centers around the story of four men — L.M., Jim, Eddie and Jackson — who work at a gas station and two sisters, Rhetta and Prudie Cupp, who work at a diner called the Double Cupp-all in an isolated, small-town road stop somewhere between Frog Level and Smyrna, N.C.

The show was conceived when two of the writers (Wann and Hardwick) were playing music in a restaurant in New York City and wrote of their experiences in the restaurant.

As Jim Wann said in a 2010 interview, “I was a scuffling songwriter/guitarist and Mark Hardwick was a piano player/actor … Mark and I were unemployed and happy to take a job playing five nights a week in the Cattleman Lounge, attached to a restaurant on one of the darker blocks west of Grand Central. Our mission was to play country standards to entertain the ‘tired businessman’ who had come for the drinks, the steaks, and the waitresses in classic Western saloon girl attire.”

On slow nights, they would play original music, gradually adding costumes, which gave them the look of guys who worked in a gas station.

This is more a stand-alone story tied together with music, but it spotlights each of the characters: Jim (Sam C. Jones), L.M. (Brady Wease), Jackson (Darrell Johnston), Rhetta (Rebecca Mason), Prudie (Sidney Raey-Gonzales) and Eddie (Michael LaPlante).  The men are postponing working on Uncle Bob’s Winnebago by singing, they say.

As for the girls, they spend their time baking pies and flirting with the men.

Each of the performers gets his or her turn to shine. LaPlante, as Eddie, sings a loving song about his beloved grandmother, whose photo hangs on the wall. Johnston rocks out to “Mona,” Wease brings down the house with his Dolly Parton memory. The women stand out in their song “The Best Man” about “the one who got away.”

The charismatic Jones, who is sort of the MC of the show, stands out in each of the songs in which he is featured.

While this does not sound like much of a show, the 20 high-spirited country-rock tunes make this a concert rather than a real musical play, and many have the audience clapping along while the girls dance in the audience. Some highlights include “T.N.D.P.W.A.M.” (“The Night Dolly Parton Was Almost Mine”) by L.M., “Tips” by the girls, and a Menu Song. There is even a raffle for someone in the audience to win a new car … air freshener.

Scenic designer Andrew Fiffick has managed to create a complex set in the tiny Pollock theater, with half of the set in the garage and the other half in the restaurant. Costume designer Jessica Minnihan get stars for L.M.’s costume for the Dolly Parton number.

Director/choreographer Abbey Campbell has created a look that is special, with all of the musical numbers as precise and crisp as a military parade.

This show aspires to be nothing but a fun evening, to show off the talents of the cast. Add to that a collection of toe-tapping music and you have a show that will appeal to an audience.