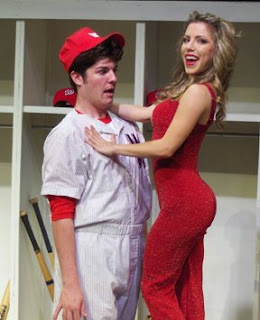 Rodger McDonald has a fiendishly good time in the Woodland Opera House production of 'Damn Yankees.'

McDonald plays Mr. Applegate, otherwise known as the Devil, who manipulates the action in this sparkling musical, directed by Bobby Granger.

Mr. Applegate is called to Earth by long-time Washington Senators fanatic Joe Boyd (Steven Read), who says he'd sell his soul to see his beloved baseball team win the pennant just once. Enter Mr. Applegate - a great entrance, by the way - who promises not only to give the Senators a winning season, but to allow Boyd to be the man who makes it all happen.

McDonald does such a wonderful job in this role that one wants to check under all that hair, to see if maybe he's hiding a couple of little horns. His satanic persona is assisted by Laurie Everly Klassen's black-and-red costume design, and Jeff Kean's delicious lighting effects.

'Damn Yankees' has a number of familiar songs, such as 'Heart' and 'Whatever Lola Wants,' but opens with the misogynistic 'Six Months Out of Every Year.' This song implies that women have no interest in baseball, but simply sit around the kitchen in aprons, complaining, waiting for their husbands to emerge from baseball season and take notice of them again.

I know many women who would take offense at that portrayal.

But remember that this show - with book by George Abbott and Douglass Wallop, and music and lyrics by Richard Adler and Jerry Ross - was written in the 1950s, and so we can take it as a quaint historical perspective.

Read, emerging only recently after a 30-year absence from the stage, gives a credible performance as Joe Boyd. He's a little shaky in his portion of the lovely song, 'Goodbye Old Girl,' but delivers a moving and tender reprise during his reunion with his wife, Meg (Kathi Davi), at the play's conclusion.

Tim Stewart steps out of the shadows to become the transformed Joe Hardy. Stewart is sensational, with a voice that fills the Opera House and an eagerness that makes his Joe a fresh-faced, likable ball player. Yet he's also able to pull off the underlying sadness of the man who lives inside him, who still misses the relationship he had with his 'old girl.'

Laura Lothian is mesmerizing as Lola, whom Applegate calls from Hades to seduce his young protégé, after Joe starts to waver in his commitment to sell his soul for a winning season. The lithe and winsome Lothian looks great in all those slinky outfits, and she manages to be both evil and sympathetic.

Brian McCann, also listed as the show's vocal director, is outstanding as Van Buren, the team manager. Although familiar to Davis Musical Theatre Company patrons, McCann is making his debut appearance at the Woodland Opera House; he's a great addition to the company.

Jori Gonzales also is making her WOH debut as Gloria Thorpe, a sports reporter who suspects there's something not quite right about Joe Hardy, and is determined to uncover the truth about the Senators' newest star player.

Kathi Ichtertz is quite good in the small role of Miss Weston.

Gino Platina's choreography is first-rate. The ball players, in particular, display a range of athletic abilities that draw applause from the audience.

The show is set in several different locations, and the confines of the Opera House stage do not lend themselves to the kind of spectacular effects one usually expects from Kean's set design. The ball park, the locker room and the manager's office are quite good; the Boyds' home and the wall outside the ball park are disappointing, but they still work well.

'Damn Yankees' is an outstanding show, with lots of good, wholesome fun. And the original script has been given some interesting enhancements that bring the story up to date in an entertaining manner.
Posted by Bev Sykes at 9:37 PM