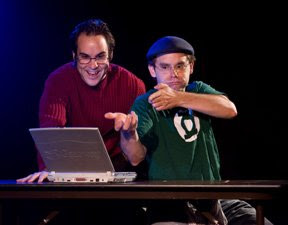 People's actions have consequences, even if the consequences are far removed from the original intent of the behavior.

Or can we really make that assumption?

The play asks a relevant contemporary question: 'In a world where violence has become a game, who is responsible when the violence becomes all too real?' Loeb's drama received its world premiere in 2007 at the San Francisco Playhouse, and was named one of the season's top 10 plays by both the San Francisco Chronicle and the Oakland Tribune; in April, the Bay Area Critics Circle named 'First Person Shooter' the best original script of the 2007-08 theater season.

Kerry is a loner, socially inept but a brilliant computer programmer, whose life revolves around the world he has created on his screen. As Loeb's play begins, Kerry is consumed with making the shootings in his game look ever more real:

'The objects now respond to force vectors with absolute physical accuracy,' he notes. 'It makes the death animations so much more life-like. Actually ... and this is the part that rules ... they aren't even animations ... the game is able to physically model where the body should fly, how all the limbs should flop around, all in real time.'

Real life intrudes on Kerry's fantasy world when two boys stage a Columbine-style attack on a school, gunning down a number of their classmates and then themselves. They leave behind a taped message thanking JetPack for its video game, and explaining that they rehearsed their massacre for months on the game's custom map, before carrying it out.

An ambulance-chasing lawyer (Lee, in a dual role) gathers the parents of the slain students, and files a lawsuit against JetPack for its role in the tragedy. All sides of the issue subsequently collide.

Strong performances control this powerful play. Misner's Kerry is a Bill Gates-like computer geek: a likable fellow dealing with his own personal tragedy, who is forced to confront a situation in which he may unwittingly have played a personal role.

Adrian Roberts gives a powerful, moving performance as Daniel Jamison, one of the slain boys' grieving father, who finds himself manipulated by the system. Both Kerry and Jamison come to see each other as the enemy, and Roberts' final scene with Misner is heartbreaking.

The action takes place in several venues; set designer Jonathan Williams handles this nicely on the small stage, by using an abstract back and side wall that consist of various sizes of blocks, on which projections and flashing 'loading' messages indicate the passage of time.

Loeb takes no obvious stance on either side of the debate, but leaves audience members to examine their own feelings on what, if any, responsibility belongs to gamers, in the wake of such tragic situations.

'First Person Shooter' is a hard-hitting drama, and is certain to promote discussion among audience members long after they leave the theater.
Posted by Bev Sykes at 3:32 PM