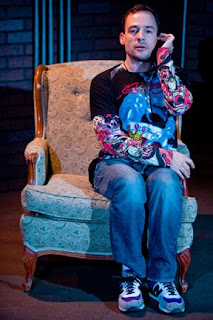 You get no parole from your family.

In a line of several one-person shows that have graced the STC stage over the years, 'No Parole' ranks among the best.

The autobiographical work primarily explores the relationship between D'Amore and his mother, who has - shall we say - a 'loose' relationship with the law. From the time D'Amore was a small child in Peru, his mother was able to steal her way into better and better social positions, with the aid of her large purse that could hold many things, all of which could be sold later on the black market, to finance their way of life.

Her accomplice from a young age was her young son, who served as the lookout and became such an accomplished actor that when the family attempted to immigrate (illegally) to the United States, he so convincingly cried about having set fire to the passport page that held the visa stamp, that the border guards let the family into the country after all.

The roughly 90-minute theater piece (without intermission) traces D'Amore's life from birth to the present, and includes many characters, all of them played by the actor himself.

The most fully formed of these characters is, of course, D'Amore's mother, with whom he has a love/not love relationship. (He can't quite say 'hate.') At the start of the show, his estranged mother is being dumped on D'Amore by his brother, after she has a stroke. He takes her in, and then is stuck trying to find her something meaningful to do.

As they adjust to existence together in a tiny New York walk-up apartment, their lifelong relationship is explored in flashbacks.

D'Amore moves so seamlessly from character to character, that the audience gets fully immersed in each new person he becomes. Particularly moving is his mother, post-stroke: a woman still filled with pride, still working all the angles (legal and illegal), but slowed down by the effects of her infirmity.

The play, directed by Margaret Perry, is both funny and touching. It's also occasionally shocking, given the sorts of scams that D'Amore's mother pulls off.

Since he grew up under her influence and learned to be such an excellent actor - an excellent manipulator of people, and twister of the truth - one wonders if this piece is autobiographical ... or merely semi-autobiographical! But what's actually true, or shaped for the show, isn't important; everything hangs together as fact, and that's all the matters.

Myke Kunkel's scenic and lighting design, and Billy Atwell's sound design, are integral 'characters' in the show. Scene changes often are accompanied by sometimes subtle, sometimes dramatic lighting changes, along with music or television sound cues, all of them spot-on.

'No Parole' is a wonderful first production in the newly named theater. This riches-to-rags immigration story will introduce you to a collection of interesting characters, provide a chance to explore the lives of a family of Peruvian grifters, and make you realize that no matter how eccentric your relatives are, family remains the tie that binds us all together.

Whether or not we like it.
Posted by Bev Sykes at 5:57 PM