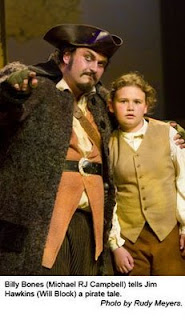 Shiver me timbers! Thar be a new show in town, and it be a treasure chest full of fun.

The Sacramento Theatre Company production of Ken Ludwig's 'Treasure Island,' directed by Peggy Shannon, is one rollicking bit of action after another. The opening night audience - consisting of a large number of children, some dressed as pirates - just loved it, although this isn't a 'children's show' per se.

Based on Robert Louis Stevenson's book of the same name, 'Treasure Island' tells of young Jim Hawkins, who matches wits with Long John Silver and his mob of pirates, to obtain the legendary Captain Flint's secret treasure. The production is filled with heart-pounding sword fights, edge-of-your-seat rescues and adventures certain to please patrons young and old.

The play's setting is created from the moment one enters the theater, with a huge ship set on stage, and its creaking sounds heard throughout. Arthur Rotch gets credit for his set design, while John Gromada adds to the atmosphere with his sound design and incidental music throughout the show.

While the production boasts many outstanding performances, the most remarkable is that given by young Will Block, in the role of Jim Hawkins. (He alternates with Anna Miles.) Block's stage presence shows a maturity beyond his years, and a level of expertise not entirely commensurate with the limited performance background in his bio.

This is a young man with oodles of talent, who handles very large amounts of dialogue, and with a convincing accent to boot.

The very nature of a show about pirates gives the actors, some of Sacramento's finest, the chance to do a lot of scenery-chewing; this is particularly true of Michael RJ Campbell in the role of Billy Bones, who escaped execution and has stolen the treasure map. Billy arrives at the lodge owned by Hawkins and his mother (Lynn Baker), and forces the other customers to drink with him, sing with him and raise a glass of rum to keep him entertained.

Also chewing the scenery in exemplary fashion are the ruthless Black Dog (Matt K. Miller) and the feared Blind Pew (Brett David Williams), who has sworn to kill Billy.

Many actors assume dual roles. Miller returns as the very prim and properly bewigged Captain Smollet, who pilots the ship, the Hispanola, which will take Jim - bearing the map given to him by Billy Bones, on his death - on a search for the treasure.

Patrick Murphy plays Squire Trelawney, a local nobleman who arranges for the voyage and finds the ship. Barry Hubbard is Dr. Livesey, a father figure to Jim, and with whom the map is entrusted.

Jonathan Rys Williams also plays two roles. He starts as Jim's father, who dies early in the play, and with whom the young lad shares a love of Shakespeare. Williams later returns as the deranged castaway Ben Gunn, a former pirate left marooned on Treasure Island, who is overjoyed to find other people on the island ... and whose only request is for a bit of cheese.

Michael Stevenson turns in an excellent performance as the peg-legged Long John Silver, who befriends Jim and is kind to the boy. Although Silver signs on to the Hispanola as its cook, he does so under false pretenses; he's also a pirate who is out to get the treasure for himself.

Christopher Duval gets high marks for his fight choreography. The show features many opportunities for swordplay among the pirates, and all are carried out beautifully.

'Treasure Island' is fun for all ages. Younger children may have difficulty with the language, which is true to Stevenson's original prose, but they'll love the action.

Particularly the excitement of the first-act conclusion.
Posted by Bev Sykes at 9:29 AM

Thank You.
Will Chapman Block

It was a well deserved review.