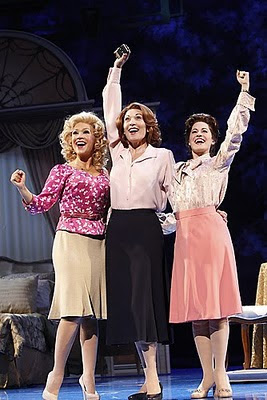 “9 to 5, the Musical,” this week’s production at the Sacramento Community Center, is a pleasant piece of fluff, without the heart or the intensity of the 1980 movie and, except for the title song, without any songs that you will remember once the curtain goes down.

But it has fun, it has frenetic dance numbers, it has a great, innovative movable set, and it has most of the plot points and dialog from the movie. (The script was written by screenwriter Patricia Resnick, who wrote the film’s script, though this being the less restrictive 21st century, there were a few more risque references in the stage show).

The original movie was a wonderful vehicle for songwriter/lyricist Dolly Parton, who played Doralee Rhodes, the buxom secretary whom everyone assumes is the office slut. Parton also wrote the title song. And so it just wouldn’t be “9 to 5″ without Dolly.

This problem is solved by Parton appearing at the start of the show as a huge projection over the stage, setting up the scene and asking the audience to envision 1979, a world of cheap gas, electric typewriters and sexual harassment in the workplace. She then introduces the characters and the story begins.

Basically, this is a story of female empowerment and the women who find they really can get it. It follows three women, the aforementioned Doralee (Diana DeGarmo); Violet Newstead (Dee Hoty), the boss’ private secretary, waiting for her shot at management, which she can never attain because she’s a woman; and newly divorced Judy Bernly (Mamie Parris), who has never held a job in her life and whose whole purpose disappeared when her husband drove off with his secretary.

Director Jeff Calhoun, with the assistance of casting office of Telsey & Co. has done a good job of recreating the movie. DeGarmo looks, talks and walks like Dolly Parton, and Hoty bears a resemblance to Lily Tomlin, who played the role in the movie, only without Tomlin’s level of acerbic wit.

Parris is not quite recognizable as a Jane Fonda look-alike, but the character of Judy was perhaps the least strong of the three. The resemblances helps the audience get into the story right away.

Joseph Mahowald plays the misogynistic Franklin Hart Jr., who objectifies all of the women under his control until a little mishap turns the tables and the three women are able to kidnap and hold the boss captive in his own home while they attempt get the goods on a little double-entry bookkeeping at the office.

Since nobody likes him to begin with, nobody seems to notice that the boss isn’t around except the office snitch Roz Keith (Kristine Zbornik), who is easily distracted by sending her off to a language school to learn French. This frees the women to establish all the nice touches that Hart has refused to consider — personal items on the desks, job-sharing, an in-office nursery, flex time.

But what happens when Hart finally manages to extricate himself from his prison and return to the office?

The plot is often interrupted for big dance numbers, choreographed by Calhoun and Lisa Stevens. The opening number, showing people waking up and going to work, is particularly clever, with all those moving set pieces.

I’m not a big fan of taking perfectly good comedy films and turning them into stage musicals. But Broadway seems to have done it successfully with the likes of shows like “Legally Blonde,” “Dirty Rotten Scoundrels” and “The Wedding Singer.” But the musicals are long on glitz and short on substance, and “9 to 5″ follows suit.

However, there’s no denying that it’s a crowd pleaser and it was nominated for four Tony and 15 Drama Desk awards.
Posted by Bev Sykes at 5:28 PM