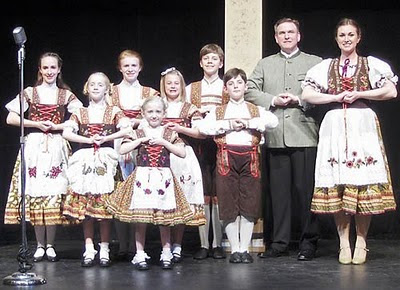 “The Sound of Music,” currently at the Woodland Opera House, under the direction of Angela Frost Baltezore, may just be the best community theater production of this beloved classic that I have ever seen.

Everything from the actors to the orchestra under the direction of James C. Glica-Hernandez to the lovely costumes by Laurie Everly-Klassen, down to the sets by John Bowles and even the speed and efficiency of the backstage crew changing the scenes was first-rate.

And what’s not to like about “The Sound of Music”? This popular Rodgers and Hammerstein musical story of the von Trapp family has more familiar tunes than most musicals. Nearly every single one of them is familiar to everyone in the audience, including ”Do Re Mi,” “My Favorite Things,” “Climb Ev’ry Mountain,” “Edelweiss” and, of course, the title song. If you don’t leave the theater humming at least one of them, you must have slept through it all.

The audience could tell from the very first scene, with nuns gathered on the stairs to the stage singing in bell-clear Gregorian chant, that we were in for something special.

Crissi Cairns Kessler is the earnest young postulant, wanting so much to become a nun; the loving governess who teaches her young charges how to sing, and reminds them about having fun; the woman learning about love for the first time, melting the heart of a military man. Kessler’s winsome personality and beautiful voice are just the frosting on the cake.

Michael Maples is a stern and distant Georg von Trapp, using brusqueness to mask the pain of losing his wife. His children must answer to whistle calls and their only exercise is marching. As Maria works her magic on him, he softens and allows himself to love his children as they are.

The children themselves are wonderful. Director Baltezore has found a group of seven professional young actors, each of whom was talented and disciplined, down to adorable little 5-year-old Anneli Spieler (Gretl), who squirmed a bit toward the end, but who never missed a cue or failed to sing with her siblings.

Emily Jo Seminoff was a lovely Liesl and Christian Salmon as Friedrich hits a high note that was nothing short of amazing. Abby Miles (Louisa), Campbell Salmon (Kurt), Hayley Harrison (Brigitta) and Casey Wathen (Marta) also were perfect in their roles.

Rodger McDonald owns the stage whenever he appears and his Max Detweiler was strong and memorable. He’s a fabulous asset to any production.

Elizabeth Nilsen is sufficiently “upper crust” as Elsa Schraeder, a woman who has her cap set for Georg, but who isn’t sure she’s ready to be mother to seven children. She’s not the most likable character in the story and Nilsen effectively manages to be both beautiful and icy.

But the most memorable character of the evening had to be Nancy Agee as the Mother Abbess, whose guidance helps Maria discover God’s plan for her. Agee has a professional voice and could easily play this role in a professional production. Her “Climb Ev’ry Mountain” was the high point of the evening and when she hit that last high note, it truly sent chills down my spine.

Though this entire production is wonderful, it would be worth seeing if only to hear Agee.

Others in the cast included Mollie Smith as Sister Berthe, Ryan Wathen as Sister Margaretta, Stephanie Blackwell as Sister Sophia and Matthew Kohrt as Rolf, the telegram delivery boy in love with Liesl.

Melissa Dahlberg makes the most of her tiny role as the second-prize winner at the music festival.

Everly-Klassen’s costumes were beautiful, particularly the children’s concert costumes and Maria’s honeymoon dress (as well as her wedding dress).

John Bowles’ set works wonders on the tiny Opera House stage, and including the aisle of the house itself was a wonderful idea. The abbey’s stained-glass windows were beautiful and the painted backdrop of the Alps gave the perfect setting to the outdoor scenes.

This is a not-to-be-missed production, if you are fan of “Sound of Music.” Even if you think you have already seen it, this production makes it worth seeing again.
Posted by Bev Sykes at 4:34 PM